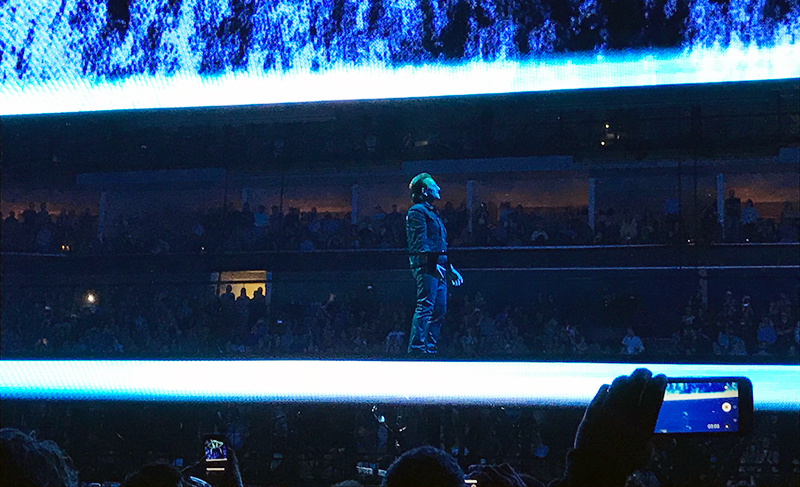 About ten minutes before the show began Wednesday night in Tulsa, Willie Williams came walking toward me and a few of the @U2 crew on the way up to his perch in “mission control” above the lower level of BOK Center. He kindly stopped for a brief chat, said he and his team were ready and everything was now in the band’s hands. He left us with a somewhat ominous preview of what was to come: “It’s a weird show!”

In the time since — 2.5 hours of watching the show itself and now a couple days of talking about it with fellow staffers and U2 fans — I’ve come to agree with him. It is kinda weird — but mostly in good ways.

Opening night was only one concert, and the show itself will surely evolve as the tour continues, but here are my random observations about what I saw, heard and felt on opening night. As always, these are one person’s opinions and your mileage may vary.

1) This is not a show/tour for casual fans. Six out of U2’s 10 most-played live songs (and 12 of the top 20) weren’t played on opening night. I have a lot of friends that I’d call casual U2 fans. They might go to one show per tour, but usually only if the band comes to their hometown. And when they see U2, they want to hear “Streets,” “Bad,” “With Or Without You” and “Mysterious Ways.” They wouldn’t really know many of the songs from the last two albums, and they’d certainly not be excited to hear the first live performance of “Acrobat.” (They’d also have no idea who MacPhisto is.) This tour isn’t for them. There are still some so-called “war horse” songs in the set, and maybe those aren’t the ones you would’ve chosen to hear if U2 was a jukebox, but let’s give credit where it’s due: This is probably the most die-hard fan-friendly set list we’re going to get at this point in U2’s career.

2) It was weird to not hear “Streets.” You probably know that I’m in the “‘Streets’ is indispensable” wing of U2 fandom. I learned on our last podcast that it hadn’t been rehearsed by that point, and started wondering what a U2 show would be like without it. Well, it was weird. I certainly missed the song. I really missed not turning around to see the fans up in the last row of the furthest-back section going absolutely ape-s**t as if they were the only fans in the building. I missed “God walking through the room,” as the band has described what happens when they play “Streets” — and I’m not sure He ever did walk through the arena in Tulsa. There was no single moment that replaced the “Streets” moment. But I think I’m kinda glad they’re doing this. After 40 years together, they shouldn’t feel obligated to play anything. I don’t want to hear a we have to play this version of “Streets.” So I hope they don’t cave in and add it as a regular part of the show later in the tour. Stick to your guns, U2. Make us wait to hear it until the next tour and we’ll appreciate it even more than we already do.

3) The augmented reality stuff was kinda cool, but not something I need to experience again and again. From my perch on the GA floor on Edge’s side, it seemed like about a third to a half of the audience knew something was going on that required their phones. It was unique and I’m sure there’s some deeper meaning in the screen beginning as an iceberg (or block of ice) and eventually becoming a waterfall that eventually covers the floor … but it was lost on me in the moment. I’ll probably look at it again briefly the upcoming one/two shows I’m seeing this tour, but I’d be fine if they decide to drop it altogether.

4) The new songs sounded better than I expected. I’m not a huge Songs Of Experience fan, and a couple of the songs I really like on the album didn’t get played. But the eight songs they did play generally sounded better than I expected. “The Blackout” is a strong opener. “American Soul” isn’t an album fave for me, but it rocked on opening night (and might be a better fit earlier in the show). “Love Is Bigger Than Anything In Its Way” might be my least favorite song on the album, but it came across pretty well live. It sounded like they’re still working out some of the new songs — “Lights Of Home” sounded a bit lethargic compared to the recorded version, but I’m sure that’ll get fixed with more performances. And I think they should stick with the electric version of “You’re The Best Thing About Me,” which I think is really underrated.

5) It was weird to hear and see a good portion of the I+E tour get repeated. This is a point of contention with some fans, much like the call backs on Songs Of Experience. I get how, if you weren’t expecting it, hearing and seeing so many songs played exactly as they were three years ago would be strange. But I think it makes sense when you put it in the context of this tour being the second half of the story of the band’s career — especially when the first half of the story was only performed in 10 North American cities. You may be plenty familiar with the arc of the show that begins with “Iris” and runs to the intermission. You may have seen the I+E tour several times in 2015. You may have seen the HBO special from Paris and own the DVD and watch them regularly. You may check all the set lists online after each show and follow the live tweeting as often as you can, and so on and so on. But the vast majority of people seeing these shows haven’t/don’t. As weird as it was to hear all those songs again, it would be even weirder to have U2 try to tell its story of innocence and experience while ignoring the innocence part.

6) I was wrong about “Acrobat.” If you’re a loyal listener of @U2’s podcast, you’ve probably heard me say several times that I didn’t think “Acrobat” would ever work live. I’ve compared it to “Electrical Storm,” another much-desired song that fans wanted the band to play, but got dropped after a handful of attempts on the 360 tour because it just didn’t sound good. I was wrong. “Acrobat” sounded much better than I thought it would, and after they get it nailed down in the coming shows, I think it’ll be a really great live song.

7) MacPhisto? Weird, but very welcome. Where old MacPhisto (1993) was campy and clever, new MacPhisto is flat-out creepy, especially the devilish Snapchat-like filter that they’re showing on screen over Bono’s face. You might have nightmares if you stare too long. But I welcome MacPhisto back with open arms because I’ve grown tired of the Bono that bludgeons the audience with overly simplistic messages about the state of the world. MacPhisto always gave Bono a way to get his message across in a wayyyyy more interesting manner, to say things in a way that he might not have been able to say otherwise. He made you think. He made you have to do a little work to figure out his point. And I’ve always liked U2 best when they challenge me. So bring it on, Mr. MacPhisto. I’m ready to be challenged again.

8) Speaking of creepy, how about “The Blackout”? MacPhisto wasn’t the only borderline scary part of the show. The shadowy figures that filled the screen during “The Blackout” — primarily images of the band membres, it seemed — were like something out of a horror movie. Some were almost shapeless; some appeared to have a visible skeleton showing. Weird.

9) I loved the way they did “Pride.” The @U2 crew was talking before the show began about how this stage setup is very difficult to capture on video, because the band uses the different stages. You can’t simultaneously point a camera at both the e-stage and the main stage. And now they added two mini stages in the Red Zones where Adam and Edge stood during “Pride,” giving us four stages to watch at once. But no matter how hard it is to capture on camera, it was really cool to see each band member in four different spots on the floor. It’ll certainly change how GA ticket holders choose their spot every night. The song itself also had an extended intro that I really liked; I’m no musician, but it sounded like Edge was playing some new guitar parts (or maybe just making some new sounds) before the song kicked in.

10) The “One” video is really powerful. I don’t know if you need to be a parent to be affected by this video, but as a parent of two kids that will soon be heading out on their own, I got really emotional watching it. It shows a typical kids’ day — waking up, breakfast, school, afternoon playing, etc. But every child in the video is wearing an army helmet, just like Edge’s daughter Sian wears on the Songs Of Experience cover and Peter Rowen wore in early U2 promo photos. The adults in the video, meanwhile, are helmet-less and either don’t see the helmets on their children, or they see the helmets and it’s totally normal, as if that’s just how the world is. Either way, it was extremely moving to this parent.

11) It’s a really long show. Look, I know many of you have complained over the years that U2 concerts are too short … but I left the BOK Center wondering if this one was too long. U2 played 27 songs — tied for the most they’ve ever played with a show in Cologne in 2015. There were three other full-length songs that were part of the Tulsa show — the intro song, the intermission (“Hold Me, Thrill Me, Kiss Me, Kill Me”) and the song played during the encore break. Thirty songs is a lot, you guys. And 2.5 hours is a long time to watch a band play. To be clear: I’m not complaining! I’m just saying that it was kinda weird for a U2 show to run this long. And if this is the new normal on the E+I tour, some of us are gonna have to make a few mental and physical adjustments out in the audience!

12) “13” is no “40,” but it might be my favorite concert ending ever. As the band played “13,” Bono walked out to the e-stage where a miniature replica of his Cedarwood Road home had been placed. He lifted the roof and pulled out a lightbulb. Turns out the lightbulb was hanging from the rafters and, when it had been lifted up to his face level, Bono held and it threw it forward. The lightbulb swung back and forth as Bono walked off the e-stage and the show ended. The E+I tour ended the exact way that the I+E tour began, but in reverse order. It’s not a communal singalong like “40” has been, but this ending is the most perfect way to wrap up and put the ribbon on a beautiful live telling of the U2/Bono story. Genius.

Night one in Tulsa had its share of innocent mistakes. There were forgotten lyrics, flubbed notes/chords and even the production team seemed to miss a cue here or there. That’s an experience to be expected where a U2 tour opener is concerned. In the end, I’m left with similar feelings that I’ve had after seeing past tour openers: The show was good but flawed, and — most importantly — offered a peak of the greatness to come.

It was 33 years ago today (My first U2 concert)

Not Just Burgers … Chicken Sandwiches, Too