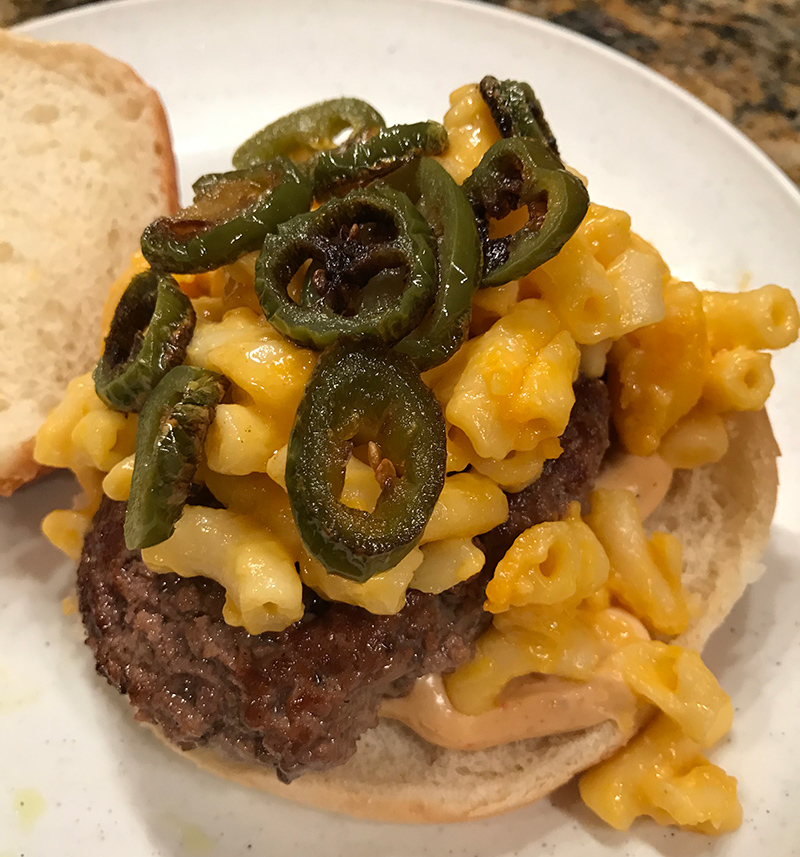 Burger #3 – The Macapeno (and the cooking process) This thing of beauty and deliciousness will be the third burger on the menu when I get around to opening my own burger joint … someday.

Maybe I’ll call it “Macapeno” or something like that. It’s a burger covered in mac-and-cheese and grilled jalapeno peppers, all sitting on top of a chipotle mayo. DELICIOUS!!! This was the maiden attempt at the Macapeno, and as good as it was, I’ll make a couple changes on the next try: better mac-and-cheese, for starters. I’m using Stouffers in the photo above, but it needs a high-quality mac-and-cheese like Beecher’s. Another change will be the addition of some BBQ sauce on top. And I’m also thinking it could use some melted cheese to counter the dryness of the main ingredients.

Still, this was a great start and I’ll be tweaking this one until it’s perfect and menu-ready.

How about a little photo collection showing the burger making process? Feel free to skip if you’re not interested. I’ll document it for myself, if nothing else.

First rule: fresh ground beef only. No more frozen burger patties at Casa McGee. OMG, it’s a world of difference when you use fresh meat. And while you have them formed and sitting on the prep plate (paper, in this case), sprinkle a healthy dose of salt and pepper on them. (I like to use garlic salt, too, to add some extra punch.) Second rule: Use a cast-iron skillet if at all possible. It heats so evenly and consistently. When you have three burgers hitting the heat, you don’t have to worry about one cooking faster than the others. Once the burgers start heating up, get the jalapeno peppers started. If I’d had more space in the main skillet, I would’ve done the peppers in there, too, to soak up the juices. But with the three patties, I figured I better use a separate skillet to be safe.

BTW, I’m cooking both the meat and the jalapenos in a thin layer of peanut oil. Once the meat is seared on the bottom, it’s time to flip and smash. Once you get them flat, sprinkle another layer of salt and pepper on this side while the bottom cooks. Pretty soon you’ll have a fully browned burger and it’ll be time for one last flip. At this point, the patties should be pretty well cooked through (unless they’re really thick) so you can add the cheese as soon as you make the final flip.

Meanwhile, you’re also grilling the jalapenos and making sure those are tossed and turned so both sides are equally charred. And when those are ready, your cheese is melted, etc. … it’s time to get these beauties plated!

Don’t underestimate the bread — the bun will make the difference between a good burger and a GREAT burger. Don’t settle on the basic store brand seeded hamburger buns. Splurge a little extra for the good stuff — like these pub buns, or brioche if you like, or whatever else you prefer that’s not bland and cheap.

And if you really wanna go all out, get another skillet going with a little bit of melted butter and lightly toast your bun before plating the burger. Maybe I’ll even give that a shot next time I work on the Macapeno.

Google Home vs. Amazon Echo #4: How many weeks until May 2nd?