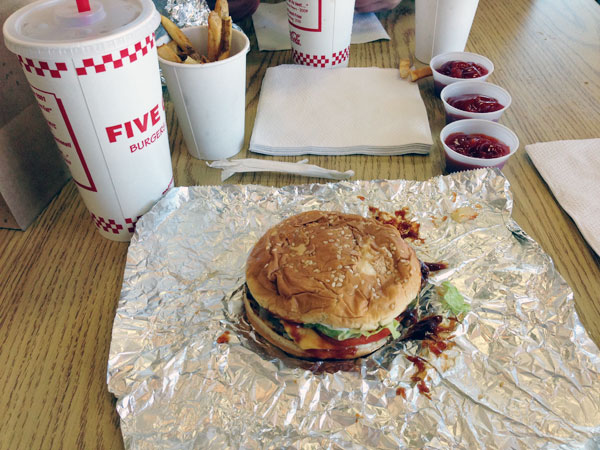 I’ve been saying for a couple months now that I’m going to be Five Guys’ version of “Jared” — you know, the guy who lost weight by eating a lot of Subway sandwiches.

Here’s why: Five out of the last six times that I’ve had Five Guys for lunch, I’ve lost weight when I got on the scale the next morning.

Let me explain how and why it works.

What I eat: This happens when I have Five Guys for lunch. I order a regular meal, which is typically a Little Cheeseburger with my favorite toppings, a Little Fries and a small drink if I’m eating at the restaurant. If I’m bringing the food home, I skip the drink and just have water at the house.

What happens: A Little Cheeseburger at Five Guys isn’t very little, and the Little Fries turn into an enormous serving of fries because they always scoop an extra serving into the bag. It’s a lot of food and it fills me up for the rest of the day.

I eat this at about noon or 1 pm and I literally don’t eat again the rest of the day. It’s that filling.

Sometimes I work out in the evening, sometimes not. Either way, by skipping dinner I somehow end up being full while eating less than a full day’s worth of calories … and I lose weight.

How much I lose: Some days I’ve lost as much as a full pound. Some days just .2 or .4 of a pound. But it’s still weight loss, no matter the amount.

Requirement: You have to eat breakfast first. Read on for why….

The One Time It Didn’t Work

As I said, this has happened five of the past six times that I’ve had Five Guys. The one time it didn’t happen? Well, I didn’t exactly follow the above plan.

I skipped breakfast that day and decided to try to make Five Guys my only meal of the whole day. Didn’t work. Since I didn’t have the breakfast calories in me, the Five Guys lunch didn’t fill me up. I got hungry and ended up having a late dinner (about 8 pm) and actually gained a pound that day.

So the lesson is obvious: You gotta have breakfast.

That’s it. The Five Guys Diet. If anyone from the restaurant chain happens on this and wants to get in touch, I’m easy to reach. 🙂

The Only Thing I Miss About East Coast Living