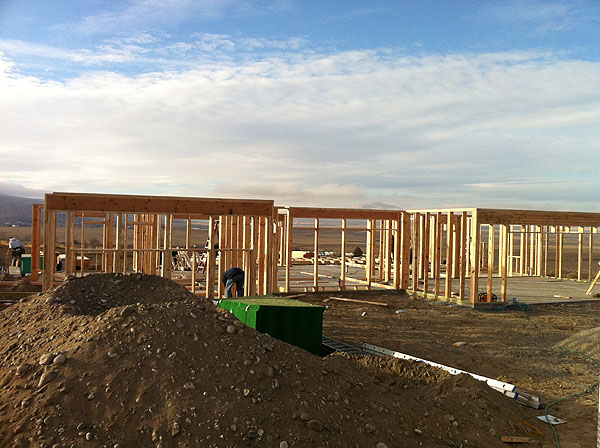 I Shrieked When I Saw This

Okay, it’s been almost a week since I posted anything about the new house, so bear with me here. I was going to post yesterday, but managed to show some restraint, okay? Okay.

So, when driving from our current house over to where our new house is, at the very end you go around a corner and BAM! — there’s our lot. Well, I went by the new house yesterday morning and I saw that they had started putting wood down. The framing had begun and, with fairly nice weather on tap this week, I knew they’d be building up this week. And then earlier today, Cari sent me a photo that showed the initial framing being done — some of the walls were up.

So I totally knew what to expect when I took the kids over there just now.

But it didn’t matter because, as soon as we got to that last corner and I could see the lot, I let out a loud (and probably somewhat feminine-sounding, not that there’s anything wrong with that!) shriek at the sight of all four walls being up and the frame appearing to be essentially in place.

It’s amazing to see in person!

It was another one of those there-are-no-words moments like last month when the first digging began.

So, here are three pictures that I took from the front and then moving around to the south side. That’s not the angle that you see (or that I saw) when you come around the corner, as I described above. When you do that in the car, you’re actually below the house and to see the silhouette of the frame up high, against the setting sun … that was amazing.

And FWIW, here’s the photo that I took yesterday when they began the framing. Cool, but not nearly as ZOMG as seeing the four walls today.

I’ll try to resist the urge to go back again tomorrow and post more pics. Wish me luck.

Can You Pick Up a Peanut M&M with Chopsticks?