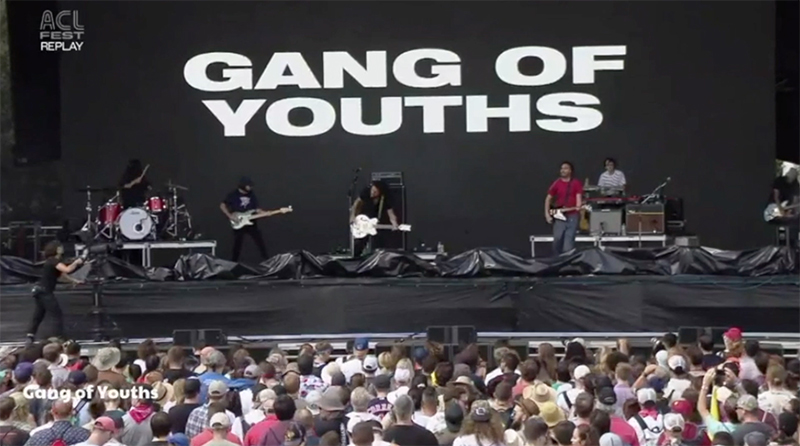 I’m nervous for a band… In a few hours, Gang of Youths is gonna take the stage at Talking Stick Resort Arena in Phoenix as the opening act for Foo Fighters. It’s the first of seven shows they’re opening for the Foos.

Each night, they’ll be playing in big arenas — 17,500 to 20,000 capacity. The buildings won’t be full when the opening act starts playing, but even at 50% capacity or so, I have to think these are the biggest crowds that Gang of Youths have ever played to in North America.

And I’m actually nervous for them!

After 30+ years with U2 as my favorite band, this is a really new — and kinda cool, frankly — feeling. With U2, it’s been a loooooooong time since anyone would doubt whether they’d be liked, have an audience, succeed. All of that has been a given, no matter how much faux modesty Bono has given off over the years.

But my new favorite band has no such guarantees. They don’t have name recognition here in North America. They don’t have radio airplay, album sales or anything like that. They have a lot to prove. There’s legitimate jeopardy as they take the stage tonight and over the next couple weeks. I know nothing about Foo fans, but I sure hope they’re open to hearing a new band while they wait for the real show to start.

Opportunity is knocking. Good luck, Gang of Youths. I’m rooting for you.

Good luck @gangofyouths. Hope you nail it and make a lot of new friends/fans on tour with the Foos. https://t.co/5LtF5HOuiZ

Well, Gang of Youths have finished their set and Foo Fighters should be starting now (or soon or already did). And based at least on a few tweets, they made a good impression on some in the audience. Way to go, GOY.

@gangofyouths first time hearing your band!!! You are awesome!!!

HOLY SHIT @gangofyouths you guys bloody killed it!!!! So happy to have gotten to hear you rock that stage!!!!!!!! You have a new forever fan!!!