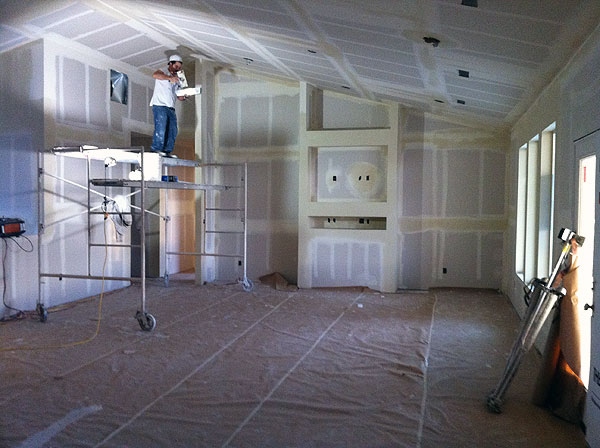 Last Tour Inside the New House?

The new house is now locked and we can no longer get inside and walk around when no one’s there (which isn’t often these days, anyway).

We had some people come to look at our current house on Friday, so we used that as an excuse to go see how the new place is coming along. We were poking around and looking through windows late in the afternoon, when the one worker still inside saw us and invited us in. Sweet!

Turns out that all of the interior walls and ceilings are now in and he was doing … something. (I have no clue, but you can see him below.) And it probably goes without saying by now, it looks amazing! Can’t believe how quickly it’s all coming together.

On the exterior, the only thing left is to paint. The garage doors are installed and even the faux rock on the front is in. Here’s a look at that.

We got to walk around the whole house and see all the rooms. Here’s an interior shot. I’m standing at what will be our dining room table and looking across into the “great room” where we’ll have the TV mounted, etc. They still have a bunch of stuff to install there — shelves on both sides of the TV, a window bench along the right side windows, etc. And then I’ll share one more photo from outside again. It’s basically the same shot as above, but I tilted the camera a bit. That makes the house darker, but the point was to get a sense of how things will look with the setting sun in the background. After all, the amazing view/sunsets is one of the main reasons we chose this spot. So that’s where things stand. Since the house is now locked, I don’t know when we’ll be able to go inside again. And there’s probably not much point taking more exterior photos until it’s painted and/or the landscaping is done. And we have no idea when those things are scheduled.

Should be a little more than a month until we’re in … as long as our existing house sells soon. Please cross your fingers/say some prayers for us. Several showings this weekend and everyone likes the place, but no offers yet.

I Would Totally Vote For This, Too