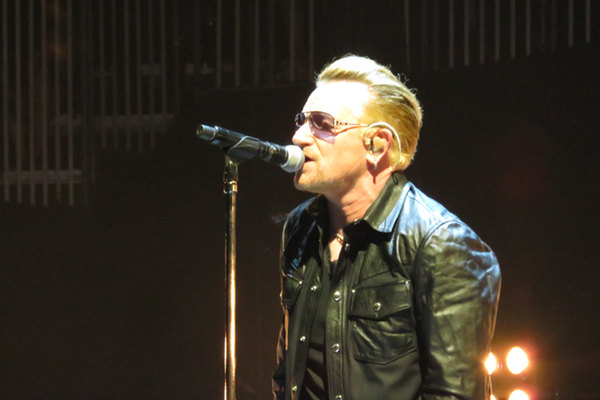 At the few shows on U2’s current tour where they’ve played “Bad” — a song in which “let it go” is one of the key lines and ideas — Bono tells the audience something along the lines of, “This is a song about surrender. Whatever you’re holding onto, whatever you need to let go of — let it go. Let it go.”

The song is accompanied by very minimal, but I believe very intentional, lighting. For most of the song, the room is black and blue, mimicking the “blue and black” referenced in the song’s lyrics. But as the song climaxes, with Bono’s urgent sing-scream of “I’m wide awake! I’m wide awake!,” every light in the house is turned on. The arena turns all white; the darkness is gone, the black and blue is gone, and it’s replaced by what my friend Tim Neufeld described as “an explosion of pure white light, bathing the audience in something akin to a spiritual blessing.”

It’s a beautiful, emotional moment in the shows that I’ve enjoyed passively, because I’ve not felt I had anything that I needed to let go.

I was at U2’s fifth (and final) concert in Chicago on Thursday night. It was a show that I had no plans to attend until about a week earlier, when I found great airfare and Ticketmaster released a set of great floor tickets. It was a very spur-of-the-moment thing. Looking back now, it’s clear I was supposed to be there.

After shooting photos and videos for @U2 for the first half of the show, I felt compelled to put my camera away for good and let the band’s performance wash over me.

When “Bad” started, my friend Scott motioned to me to join him in moving up closer to the stage. For some reason, I declined. I felt like I needed to experience this alone.

As the song began, Bono started on his “let it go/surrender” talk. I’ve heard it before, but this time I was transported back to the summer of 1989, when I was home from college and spent an afternoon watching Rattle And Hum with my parents. I guided them through the movie, explaining what the songs meant, making sure they heard the lyrics correctly. During “Bad,” we paused and I explained that the song was written for a friend of Bono’s that nearly died of a heroin overdose, and how the song’s lyrics were about that “isolation, desolation” and also served as a call to “let it go” (it = the addiction) and “not fade away.” In the movie, the band — Bono, in particular — delivers an incredibly riveting, emotional performance of the song. I looked at my dad that afternoon, and he was wiping a tear from his eye. It was the first time I was able to share my love for U2 with my dad, and it was everything to me.

All of that came flooding back to me on Thursday night as the band played “Bad.” I saw my dad sitting in his chair in front of the TV, watching “Bad” with me. A flood of tears began to fall. My head was down. My eyes were closed. The band was playing and I took that moment to do something I wasn’t able to do before he died in February: say goodbye.

I suppose I’d been fighting this since then. But now the song and its message was hitting me hard. I was an active participant this time. I had to surrender. I had to let him go.

My head was still down and my eyes closed, and I think I felt a hand patting me gently on the shoulder. I opened my eyes for a moment and saw Scott’s feet. He was now standing right in front of me, in between me and everyone else. I don’t know if he did that intentionally, but it felt like he was there to protect me, to be a shield of some sort while I wrestled with this moment.

I kept my head down and closed my eyes again and let the tears flow as the song continued. I talked to my dad some more.

Near the end of the song, I stopped wrestling. I finally lifted my head and opened my eyes.

And it was at that exact moment that the arena turned from black and blue to pure white.