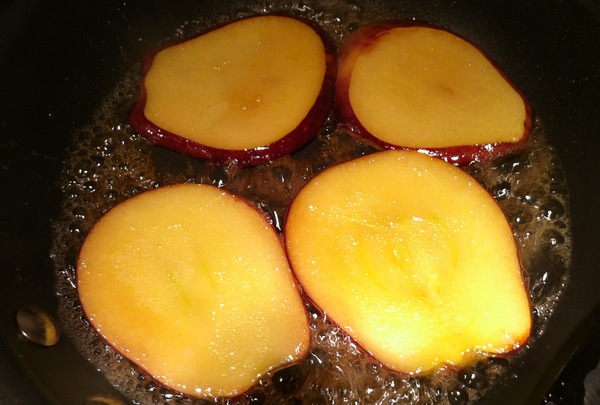 I’m a big fan of some of the shows on the Food Network, and on other channels that show cooking programs. Iron Chef, Next Iron Chef, Chopped, Cupcake Wars and my favorite, which starts season #3 this coming Sunday — Worst Cooks In America. (Can’t wait!)

Unfortunately, I’m not much of a chef. The most amazing thing about these shows is how the chefs always know exactly what foods and spices and juices will go well together to make something delicious.

I want to know how that works.

For the past month or so, I’ve been telling the family that, one of these nights, I’m gonna just start throwing random things into a frying pan and see what it tastes like. When I was doing the grocery shopping a couple weekends ago, it took forever because I walked up and down the aisles slowly trying to imagine new dishes that I could try to cook.

I finally gave it a try last night. It was delicious! After I finished making and eating this food, I gave it a name: Honey-Glazed Apples. Recipe is below, but first a photo from the middle of my first Iron Chef moment. 1. First, I sliced the apple into fairly thin pieces, sort of like large potato chips. My slicing wasn’t even, though, and as it turns out, the thicker slices seemed a little better to me than the thinner ones.

2. I placed four apple slices in a small frying pan and poured honey over them — not completely covering them, but enough honey so that they’d cook in the liquid. It was about the same amount of syrup that I’d pour on pancakes.

3. I let them cook for about 5-6 minutes on medium heat, until they started getting soft.

4. I added vanilla. Probably used too much, but it sure tasted good.

(The photo above was taken at this point.)

5. Continued cooking until the apples started to brown and the honey/vanilla was getting soaked up.

6. At the last minute, I sprinkled a dash of sugar on each apple slice, turned them over once more and then they were done!

I had to let the apples cool off a bit, but they were really great — super sweet (obviously!) and a good, sticky texture. As they continued to cool off, they started to look a lot like potato chips. I ate two slices plain, and then put the other two on top of vanilla ice cream, which was incredibly great.

All in all, my first Iron Chef moment was a big success and I’ll definitely do this again. Cari suggested I use cinnamon or maybe brown sugar next time, both of which sound good.