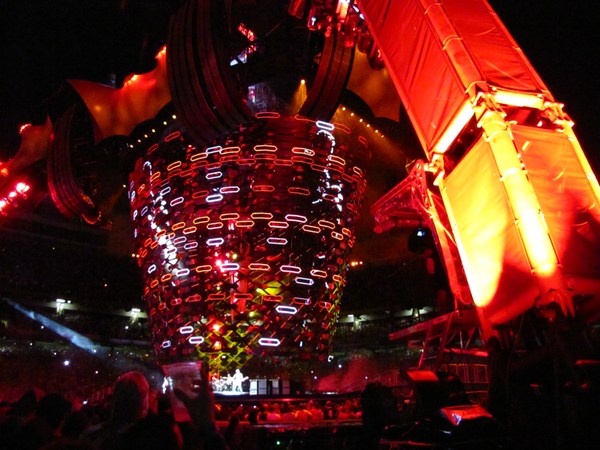 U2.com is letting fans pick the track list for U22, the new 22-song CD set that will be included as part of the 2012 members’ package. Out of 46 possible songs that were played during the U2 360 tour, fans can choose 22 and the songs with the most votes will be included. It’s a pretty neat idea. (Note: There were actually more than 50 songs played during the 360 tour, but only 46 are listed as choices on U2.com.)

Along with that, U2.com has invited a handful of people — fans and associates of the band — to submit articles describing their 22 choices. Mine was posted last week and I’d like to reproduce it here in case that URL goes away at some point. So this is how Dr. Frankenstein felt, isn’t it? But instead of building a monster from disparate parts, I’m trying to build a Best-Of-U2-360 setlist, pulling in songs from three quite different tours that spanned more than two years.

Let’s see… I’ll take the heart of this tour and match it with the brains of this other tour, and then throw in some of the muscle from that other tour. Voilá! Our 22-song creature lives!

I’m not usually big on debating set lists, dreaming up set lists, or anything along those lines. I prefer to count myself blessed that U2 is still touring and that I’m still able to see a few shows each time.

But here’s a confession: Before the 360 tour began, I secretly harbored a desire for U2 to start each show with a barrage of songs from No Line On The Horizon, a Zoo TV-like salute to everyone who bought tickets wanting a greatest hits show. So, now that U2.com has invited me to play Dr. Frankenstein and build my own version of U22, that’s how I’ll begin! Ready to meet my monster?