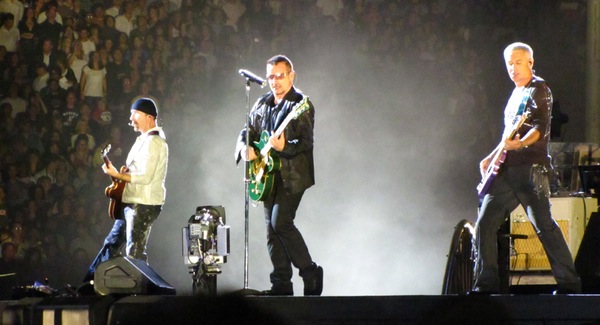 My U2 Playlist on U2.com

The folks who handle editorial on U2.com invited me again to contribute to an ongoing series called “My U2 Playlist.” (That must mean my first contribution wasn’t a complete turn-off.)

The premise is pretty simple: You just pick up to 15 of your favorite songs and explain why you love them. Choosing 15 songs and writing the playlist, however, wasn’t so simple. I think my original list had something like 34 songs on it.

Since the essay is behind the U2.com members’ paywall, and since I’m always afraid that content/URLs will disappear after a while, I’m going to post my contribution below. In the U2.com version, each song on the playlist includes a photo of the album cover — I’m replacing that with various embedded videos, some of which correspond directly to the text that I wrote.

Enjoy! And if you’re a U2 fan, feel free to comment/argue/etc. in the comments at the end.

My U2 Playlist
by Matt McGee

The first U2 song I heard was “I Will Follow” when it was played on a Philadelphia radio station in 1981. I liked the song more with each hearing, and considered myself a fan, but I have to confess that I was still more into The Police at the time. (And a few of the more dodgy artists of the early ’80s that will remain unmentioned here.)

U2 didn’t really catch me hook, line and sinker until a couple years later, so that’s where my U2 playlist has to begin … before it wanders off in no particular order to the finish.

I’m a sucker for a piano, and even more so when a rock band is using it. The fact that Edge was playing both the piano and guitar simultaneously — and effortlessly — was jaw-dropping. Throw in Adam’s fantastic bass line and Larry’s terrific drum work … just wow. Watch the Zoo TV Sydney version of this if you need a reminder of what a great song it is.

My first U2 concert experience was from the fourth row of a show on The Unforgettable Fire tour, and “Bad” quickly became Exhibit A when talking about U2 songs that were good on record, but became an entirely better beast in concert.

It’s interesting how this song has taken on an almost mystical aura among U2 fans in recent years. I credit that to the fact that U2 has seriously underplayed this song in concert over the past couple tours. Here’s hoping that changes next time around. Right, gang?

Speaking of mystical auras! Another song that fans around the globe would almost die to hear in concert just once. And the lucky fans in New Zealand get it every time, don’t they? (Jealous!)

I love the way this song simmers out of the gate and gallops along. But for me, it’s really all about Bono’s guttural wailing at the end — the Spirit coming out, the rain coming down. And all the emotion with it.

Maybe one of the most perfect pieces of music that U2 has ever created. Seriously, fire up your copy of Boy and fast-forward to about the 4:00 mark of this combo.

The song is really starting to take off at this point and you think they’re about to go into full-flight mode. Then … what? They pull back. Restraint. Discipline. Starting at about the 4:40 mark and lasting for almost two full minutes, there’s a stunning, quiet interlude. The song crawls along at its own pace.

I’m blown away by the patience. Boy is such a frenetic album and most songs feel like a race to the finish. “An Cat Dubh/Into The Heart” just defies logic. You have to pinch yourself and remember: U2 were 19 and 20 years old when they pulled this off. Are you kidding me?

It’s just one of the most perfect 4-5 songs ever written. By anyone. And that’s about all that needs to be said.

7. Original Of The Species

There are a handful of U2 songs that can bring me to tears in any circumstance, and this is one of them. I think Bono has said that it’s written with his daughter(s) in mind, or maybe it was Edge’s daughter(s), but I think of it more generally as a tribute to the amazing and mysterious creation that is the female.

Some fans have said that the lyrics in this one don’t make sense but, as a guy who’s spent 40+ years trying to understand females … well, maybe the lyrics don’t need to make sense. (Am I right, guys?)

By the way, the Live In Milan version of this song with the string section playing from the Vertigo tour’s b-stage is where it’s at for me. A real keeper.

This song was the centerpiece of the best U2 concert I’ve seen: April 20, 2001, in San Jose. That’s the first time U2 ever played this one live, and you could just FEEL it coming as soon as you walked inside the arena.

When it finally happened, it was like the roof disappeared and the skies opened up. There was magic in the arena that night thanks to this song. For at least a while, Bono called it the best show of his life and Willie Williams called it “transcendental.” They can thank “Kite,” one of U2’s really underrated gems.

9. Dreaming With Tears In My Eyes

Can I go off the beaten track a bit here? This is a Bono solo effort (actually, Larry plays drums and tambourine, too) from a 1997 tribute CD called The Songs Of Jimmie Rodgers.

I have to include it because I think it’s one of Bono’s finest vocals ever. There’s a real melancholy in his delivery. Suggest listening to this one with a great pair of headphones. It’s a gentle song, but one that doesn’t leave you easily afterward.

It’s hard to imagine anything stealing the show from “Streets,” but this was THE showstopper of the PopMart tour. A more personal version of “Sunday Bloody Sunday,” I think, with Bono pleading — in concert, praying — for The Troubles to stop. It’s one of his best lyrical and vocal performances, and Adam’s bass line really stands out for me, too.

I know peace has prevailed, but I’d love to see and hear this one again live down the road. If “Sunday Bloody Sunday” can be reworked to fit current events from tour to tour, maybe “Please” can, too.

11. I Still Haven’t Found What I’m Looking For

This is one of U2’s overplayed Big Hits that I grew tired of … for about 20 years. But as often happens with life and U2 songs, things change. More than any other, this song helped get me through some difficult moments in the last couple years and now it’s a must for my playlist. Don’t ever count out a U2 song.

Really, how can you beat that? It’s far and away the best live song that U2 wrote in the 2000s with lyrics that hit me right at home in so many different ways.

But what I really love is how Edge makes his guitar sing as Bono asks the crowd, “Can you see the beauty inside of me?” Listen at the 2:32 mark of the Live at the Rose Bowl version and you’ll know what I mean. Chills.

I’m not sure why I’m putting this track here, right in the middle of several big concert hits. But, then again, “Cedars Of Lebanon” would stand out no matter where I put it, right?

This song sounds so un-U2 to me. Maybe it’s Bono’s mostly-spoken delivery? Maybe it’s the third-person storytelling? I don’t know. It’s certainly not the only quiet and moody song U2 has written. Heck, most of their album closers fit that description.

But this is the song that I return to time and again from No Line On The Horizon.

I’d forgotten how much I loved this until the 360 tour rolled around. Since then, there’ve been nights when I’ve played it on repeat, non-stop for 45 minutes while walking on a treadmill at the local gym. There are also nights when I’ll turn off the lights, put on my headphones and watch the Live at the Rose Bowl version about 6-7 times in a row in silence and awe. Light my way, indeed.

15. Where The Streets Have No Name

Sorry to end on a cliché, but I can’t tell you how much this song means to me. I’ll just say this: In between tours, this is the song I most want to see and hear again. And when I think about the fact that someday U2 is going to call it quits, nothing scares me like the thought of never experiencing “Streets” live again. Nothing.