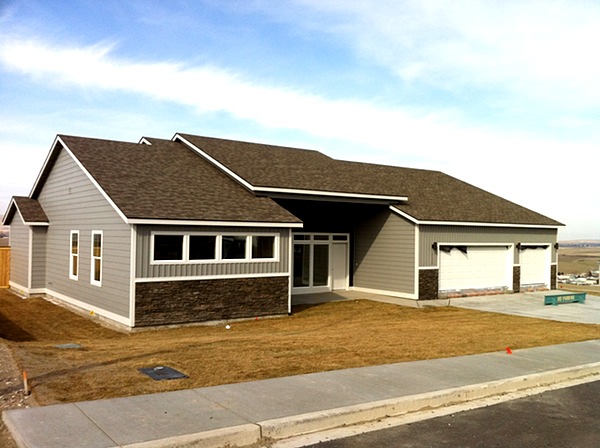 Personal Thoughts on a New Home

I’m beginning this post without a clear sense of what all I want to say, nor how best to say it. I apologize now for what may end up reading like a stream of consciousness. I think the main point I want to make here is that there’s a lot of meaning to our move to a new house, but the house itself isn’t important. At least not for the reasons you’d expect. (I may have to change that sentence later. Not sure if “meaning” and “important” are what I’m trying to say.) We’ll be in the new house in a matter of days. I’m very excited about that, as you’d expect anyone moving to a new house to be — especially a house that’s much bigger and nicer than their current home.

But at the same time, I’ve found myself in a strange, almost Zen-like state of calm over the whole thing. Not too long ago, it was mentioned to us that the sale could still fall apart and that the builder would be able to put the house on the market and sell it to someone else. And I was fine with that!

Well, not really. I think it’s all down to faith. As Christians, we’re often reminded to give our problems, stresses, concerns, fears, etc. to God. That’s easier said than done — trust me, I’ve tried many times over the years. But I actually did give this whole home-buying situation to God way back in October when we first saw the available lot. God, if this is where You want us, make it obvious. Lead the way and we’ll follow. And while we’ve done everything we needed along the way to make this a reality, I’ve been very cognizant that moving may not be what God has in His plans for us right now.

I think that can be explained to some degree by the aborted home-buying attempt we had two years ago; we tried to rush into a new home, got very emotional and attached to it … and then God stepped in and made it painfully obvious that we weren’t doing the right thing.

The whole Zen-calm thing can also be explained by the fact that I’m not big on “things.” I don’t drive a cool car; it’s a 1999 Toyota Corolla with 99,900+ miles on it and I’ll drive this car until it can’t be driven anymore. I don’t need/want a nice house as a status symbol. I’m a big believer in the you can’t take it with you idea — none of this stuff we’re buying and storing here on earth matters. Can’t take it with us when we die. So it’s not really important in the long run.

But this move and this house does have a lot of meaning. And that’s why I’ve shared about 15 blog posts and photos over the past couple months. To understand the meaning, there are a couple of things I need to say.

You’re gonna think this is strange. Even though we’ve lived in this current house since Christmas, 1998, I still don’t feel like it’s mine. I’ve never felt like it’s mine. It belongs to a gal named Robbin — the first owner and the person from whom we bought the house all those years ago.

Weird, huh? And it doesn’t help that, to this day, we continue to get about one piece of mail every month addressed to Robbin.

I love this house and it’s been wonderful for us, but I recall saying to Cari many years ago that I’d never buy a pre-owned house again. I’d only want to custom build a home that’s mine/ours, built to our specifications, that no one else has ever lived in before.

That’s exactly what we’re doing now, and it feels very right. It gives this move a lot of meaning … we’ll finally have our house.

When I was in college taking journalism/broadcasting classes at Pepperdine University, we’d generally have 1-2 guest lecturers every semester. These were usually well-known Los Angeles TV news anchors/reporters, or maybe past Pepperdine grads who were working in the industry — people with tales to tell and advice to share from the real world.

Do you know what stood out for me the most? Do you know the one thing that I still remember about those guest lectures?

It’s this: Every single person told us to plan on moving from small town to small town, to plan on living in apartments and eating inexpensive meals, to plan on not really having a home for years while we struggled to make it.

They painted a picture of young broadcasters as drifters, vagabonds, never staying in one place too long unless we were lucky enough to make it to the bigtime.

They warned us that, if we were looking for a stable job that would let us live in a comfortable home with a spouse and kids, this wasn’t the right career.

I wasn’t deterred. I stuck with my plan to be a sportscaster. I actually had a mental schedule for when I expected to get my first, second and third jobs — how long I’d be working in small towns, when I’d reach a mid-sized market (like Spokane, for example), when I’d reach a major city (like Seattle), and ultimately … when I’d start working at ESPN.

But I told myself not to plan on having my own house until I was 40-50 years old. To plan on working long hours for little pay. To plan on eating a lot of Top Ramen. To “slum it” for a good portion of my career. A home? Kids? Pets? Those things were way off in the distance.

I was afraid that my parents wouldn’t understand; that they’d see their son still living in an apartment at the age of 30-whatever and think I was a failure. That really bothered me because, like every kid, I really wanted (and still do) to make my parents proud of me. The Guest Lecturers Were Right

As it turns out, the guest lecturers at Pepperdine were right. Broadcasting didn’t mesh with “settling down” and “starting a family.”

Cari and I decided it was time to start a family in 1997. We wanted to settle down here in the Tri-Cities. We’d been married for 5+ years. We were living in an apartment in Kennewick and I was earning a salary of about $20,000 per year (seriously, and that’s gross income, before taxes) as the Sports Director for KEPR-TV, the local CBS affiliate.

You can’t support a family when you’re making less than the Drive-Thru Manager at McDonald’s!

What on earth could I do for a living? Not much. I was trained as a broadcaster. Political Science was my minor at Pepperdine and it’s not like I was about to get into politics.

But there was this: I’d been teaching myself HTML — how to build websites — for a couple years. I figured I could continue to learn more and be good enough to do that for a living.

After teaching myself how to build a basic website, and teaching myself basic graphic design, I got a better paying job with regular hours doing web design with One World Telecommunications here in the Tri-Cities. I’ll forever be grateful to Don Short and the gang for rescuing me from TV sports.

I taught myself how to do SEO. This was out of necessity; we were building websites for local businesses but no one could find them.

I taught myself how to blog because it became obvious around 2004-2005 that you couldn’t get ahead in SEO without giving away your knowledge via quality, informative articles. I quickly learned the value of being able to write (to this day, I believe there’s no greater skill a person can have — if you can write, you can do anything you want in this world) and started my SEO blog in early 2006.

(Meanwhile, around this same time, we were swimming in debt — you’d be shocked to know how bad it was. Cari was struggling to get her real estate career going. I wasn’t exactly getting rich, even though it was much better than the days of doing TV sports. We probably should’ve declared bankruptcy at some point, but we didn’t.)

That SEO blog later became the main reason I landed a job doing SEO for a company in Seattle. The gig wasn’t great and I was away from home half of every month, but the money was more than double my previous salary and it got us started — along with Cari’s real estate work finally starting to take off — on the road to paying down our debt.

Now I’m in about as perfect a situation as I can imagine. I love what I do for a living. I get to wake up every day and work with some of nicest, best and smartest people in my field. I earn a generous salary and get to work from home, which means I get to see my son every day when he walks through the door after school and I get to go meet my daughter as she walks home from school every day.

What All This Has To Do With Our New Home

As I said in #1 above, I still don’t feel like I’ve ever owned my own home.

As I said in #2 above, I was in a career that wasn’t conducive to owning a home … until I took the risk of giving up on TV and teaching myself to do something else, something that would be better for the family.

Cari and I bought our current house in 1998, about a year after I left TV to work on websites. I was happy to be living in my own home much earlier than the sportscasting plan had suggested I would. I was happy to know that my parents could see that their son was finally a homeowner. But I never felt like it was really my own home.

So, our new house represents something else.

Cari left retail and taught herself to be a fantastic real estate agent (and this experience has shown me how really skilled she is), and I left TV and taught myself websites and online marketing. We busted our asses for years to pay down debt and do what’s right in God’s eyes, what’s right for one another, and what’s right for our children. And God has blessed us immeasurably along the way, far beyond what we deserve. (That’s what grace is, after all.)

So the meaning that I mentioned earlier about this new house and this move is that nothing worthwhile comes easy, and nothing easy is worthwhile.

I want my kids to understand that owning a home — especially a really nice new one that no one’s ever lived in before — is a blessing and a privilege, not a right. It’s not something that just happens to you someday; you have to go out and make it happen through hard work and perseverance, and you have to combine that with a lot of prayer and seeking out what God’s will is for every moment. I want them to count every minute in the new house as a blessing. I want them to grow up appreciating what they have in life not because of what it is (a house, a car, whatever), but because of how they got it.

Because what it is doesn’t really matter; you can’t take it with you. But how you got it … well, there should be a lot of meaning in that.

John Wooden’s Rules for Life (AKA “Sets of Suggestions”)