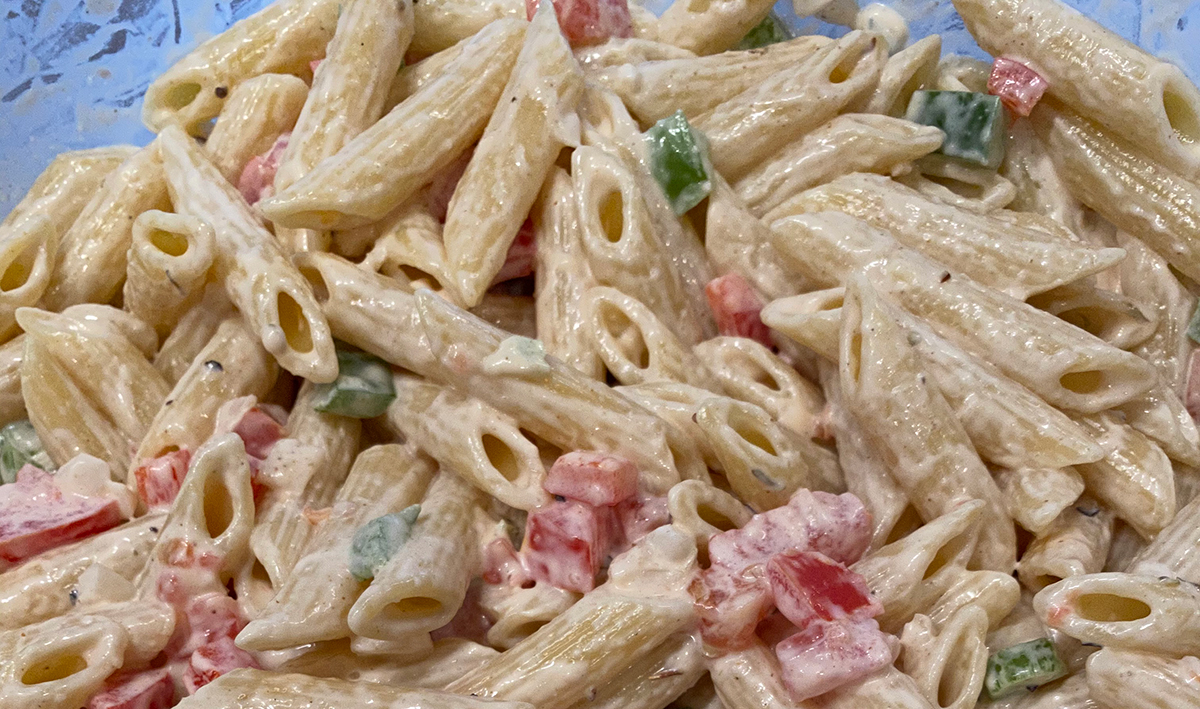 When I finally get around to opening my burger joint, it’ll have all the regular side-dishes you’d expect — french fries (couple styles), tater tots, onion rings, etc.

It’ll also have this macaroni salad that I’ve been eating since I was a tiny little boy.

It’s really simple. (Is there ANY form of mac salad that’s complicated? Hope not.)

That’s the whole ingredient list. You just cook the pasta normally, then add everything else in and stir until it’s mixed. Simple.

But there are a few notes I should pass along:

Pasta: Any kind will work, really. The photo above is Penne. It also works with Ziti, Elbows, and any tube-style or twist-style pasta. I wouldn’t use long pastas like spaghetti or fettuccine because that just seems … weird. But TBH it would probably taste fine.

Counts: Other than the pasta, I really have no idea about the counts I listed above. I really do just eyeball things and stop putting in green pepper when it looks like enough. But I think one of each vegetable above is a safe guide to use. With the exception of the…

Onion: This is an “add to taste” thing. You definitely want some onion in there to balance out the other tastes, but if you’re not a big onion fan, probably a quarter or half of an onion would be enough. I generally use either a standard yellow or sweet onion.

Mayo: Seriously have no idea how much I put in. It’s probably closer to two cups.

Jane’s Krazy Mixed-Up Salt: This is NOT optional. It’s the best seasoning out there for stuff like this, so hunt high and low if you need to, get it on Amazon if you need to, whatever. Again, season to taste — start with small amounts and add as you go. You should be able to clearly taste this, but be careful about overdoing it. (BTW, Jane’s is also great on tuna salad.)

Final note: The great thing about salads like this is that you can play around and try new things. When I made this a month ago, the only onions we had in the house were red onions and scallions — so I used them both and it was still delicious!

It All Comes Down To Discipline