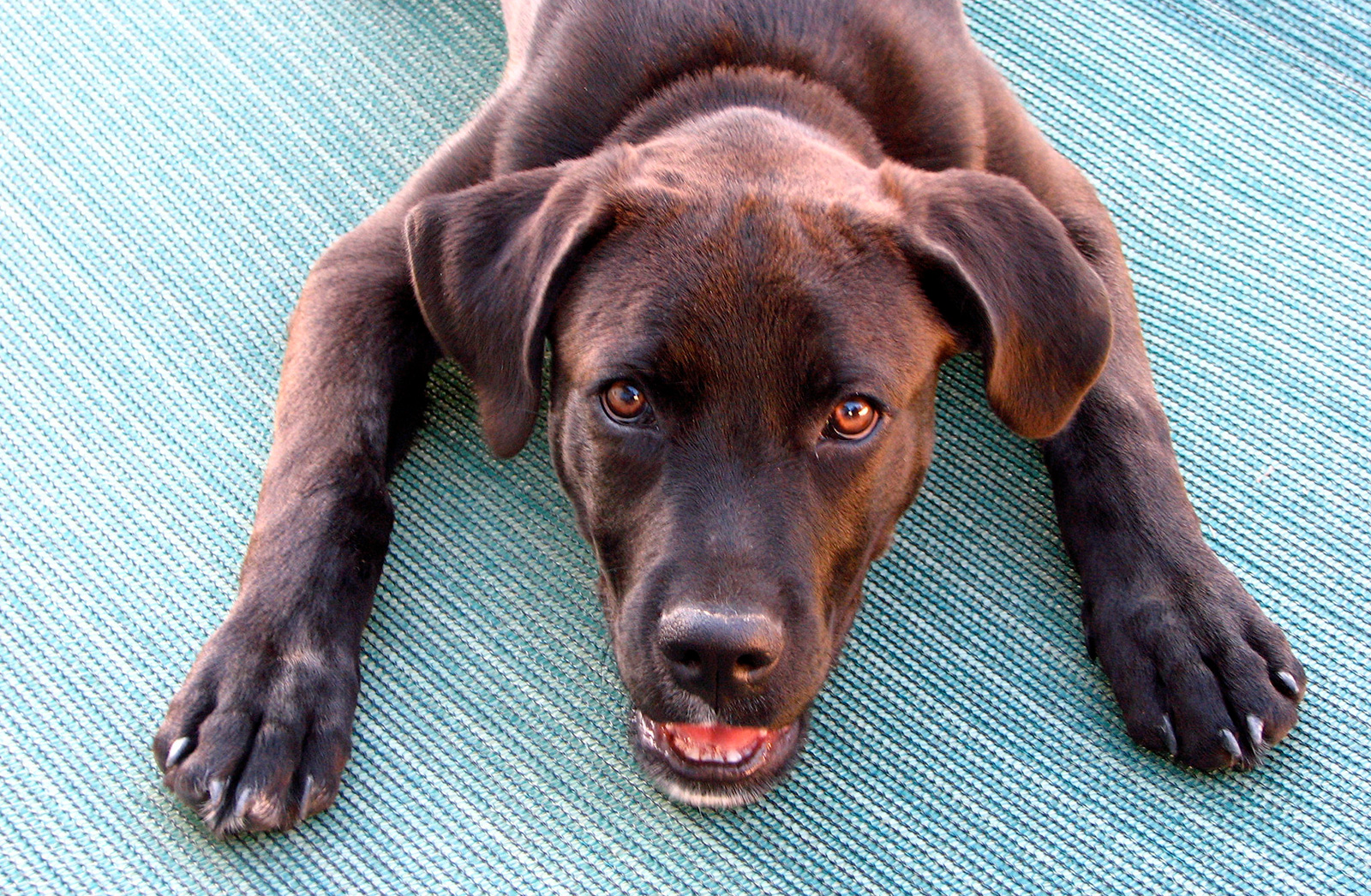 Sparky had the softest ears I’ve ever touched.

He hated when I touched them. Like … one little touch and he’d shake his head to get me off, then he’d give me this look of sheer exasperation. If I kept it up — and I usually did — he’d eventually get up and go to another room or something. His ears were a no-go zone.

But I couldn’t resist. He was a short-hair dog so most of his body was pretty smooth, but the tips of his ears were like black feathers, softer than any pillow I’ve ever slept on. I’ll forever miss touching those ears.

We said goodbye to Sparky today after 11 years and five months as the fifth member of our family. It hurts like hell.

We had about 24 hours notice. Cari and I took him to the vet yesterday because he hasn’t been himself for the past couple months — skipping meals, lethargic, separating himself from the family. Turns out he had a huge tumor that was pressing up against his stomach, crushing it against the top of his body cavity and crushing his liver and kidneys against the bottom. There was also what looked like blood in his body cavity, or some kind of liquid that didn’t belong where it was. She said there was a 70% chance the tumor was malignant (at some point I heard the word “cancer”) and that surgery was no guarantee he’d live more than a couple more weeks.

I think that’s all correct; I almost passed out when the vet showed us the x-rays, so it’s possible I misheard something. When she finished talking, as I stared at the blob on the x-ray, I asked if it was about the size of a baseball. “Oh no,” she said. “It’s about this big…” and she held her hands apart much wider, about the size of an eggplant or squash. That was all we needed to see and know. So we decided to bring him home for one last night together. To say our goodbyes. We’ve all been crying since then. Still are.

Over the past 24 hours, I kept fighting myself about what you’re reading right now.

You should write something about Sparky to share how much he meant to you and the family.

No, I’m not gonna write a eulogy for a dog, FFS.

You can see which voice won.

We brought him home on July 4, 2008 — Independence Day. So we named him Sparky. He was a stray that a family friend had found in Pasco. I remember desperately not wanting a dog at the time. They’re too expensive, they’re too much maintenance, and all that. But when we all went to see him … there was no discussion. He was coming home with us.

The vet guessed that he was about three months old. He was perfect in every way. We didn’t have to potty-train him. We didn’t have to take him to any training classes. He was the silliest, happiest, jumpiest, most-playful puppy I ever saw. He did this thing where he’d run across the back yard and then flop on his side in the grass, like you can see in the second half of this video:

He was always chewing things. One day at our old house, he chewed a hole through the dry wall in the laundry room. I remember one night hearing him grunting and groaning outside like he was in a fight with another dog. Turns out he was eating a small tree.

He loved to run around in the snow every winter.

He loved to dig in the back yard — I mean huge holes that often destroyed my amateur landscaping work. I yelled at him too often about the digging, and I hate that I did that. I apologized to him today for getting angry about such a natural dog behavior. Right now, there’s a trench that he dug along the north edge of the back yard that’s probably 5 feet long and a foot deep. I’m leaning toward never filling it in.

When we brought him home that day in 2008, he was our dog — the whole family’s dog. We all agreed to that. We’d share duties on cleaning up his back yard messes. We’d share feeding duties. We’d all take him for walks. He didn’t belong to any one of us.

I didn’t do anything special to deserve all that love and attention. It happened because we spent the most time together. I started working from home about two months after we brought him home. His space was the laundry room, which was right next to the little pantry-turned-office where I worked all day long. When I was in my office, he’d come lay down right at my feet, next to the desk and briefcase that I kept on the floor. I had to be super-cautious about where my office chair’s wheels were.

Sparky and I were together all the time. He was the perfect office co-worker — never argued with anything I said or did!

After a while, most of that stuff we agreed to share as a family became my responsibility. I cleaned up his poop in the back yard. I gave him baths. I took him in for his vet checkups. Sure, Cari and the kids would feed him at times and take him for walks, and they loved him tons (and he loved them), but we all realized over time that he chose me as his. I used to joke that I didn’t love him, but that was a defense mechanism because I was so close to him and was afraid of what it’d be like to lose him.

From those early days at our old house up until these past few days when he wasn’t feeling well, whenever I got up to go somewhere, he’d follow. Every time I moved, he followed. I could’ve retired by now if I had five dollars for every time I told Sparky I was just getting some water or going to the bathroom. He’d just look at me, as if to say, “Can I come anyway?”

Right now I’d do just about anything for one more chance to tell him he doesn’t need to follow me.

If you’d asked me a year ago whether I’d want to be in the room when Sparky died, hell no. Not gonna happen. But a few months ago, I saw something on Twitter or Facebook — an article or a post where a veterinarian was encouraging people to stay with their dogs until the final breath. The message was something like, “If the roles were reversed, your dog would stay by your side. Your dog deserves the same from you.” That hit me hard, and I vowed to stay with Sparky when the time came to say goodbye.

Today was really tough. Not as tough as being in the room when mom died, but not too far behind. The staff at Meadow Hills was wonderful, as they’ve always been. They put Cari and me in a room with Sparky, door closed and blinds drawn so we had total privacy. There was a dog bed there. They patiently and lovingly told us what to expect, what Sparky would be feeling and all that. They let us spend as much time with him as we needed. I took this one last photo of him, about 15 minutes before he left us.

We fed him treats — the first food he’d eaten in two days. There was no bowl around, but there was a water bottle, so I poured some into my cupped hand and he drank a bit. We talked to him. We told him how much we loved him, how wonderful he was and how much we’d miss him. We hugged him. And we cried. OMG did we cry.

They gave him a painkiller and something to knock him out. He was still alive and breathing, but had gone unconscious on the bed. He was laying more comfortably than he has in a while. We talked to him some more and kept petting him. We were finally ready to let him go.

The doctor came in and talked to us a bit, made sure we were okay and ready. She told us some dogs have involuntary movements after they stop breathing, some even pee or poop, and we shouldn’t be alarmed — it’s all totally natural. She put a needle in his leg. He stopped breathing about 30 seconds later, and we saw a couple small muscle twitches. All of a sudden his tail moved up about 6 inches off the floor, then slowly dropped again. My God, he wagged his tail for us one last time.

The doctor told us to take as much time as we needed with him, then left us alone with our wonderful boy. Cari and I talked to him some more, hugged each other and cried.

We were finally ready to go home. We both got up and gathered our belongings. I leaned down, whispered goodbye, and touched the tip of his ear one last time.