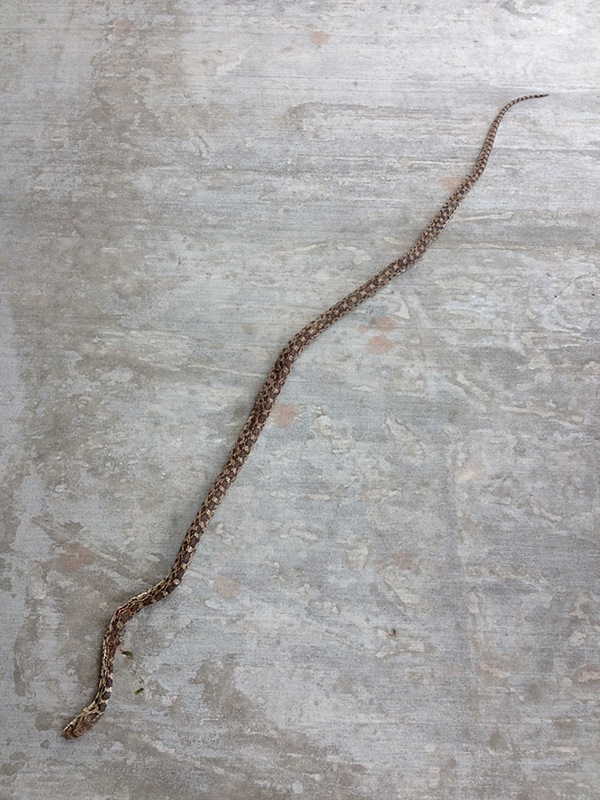 Snake on a Plain

We had quite an interesting day on Saturday, thanks in large part to this fellow: That is something called a gopher snake. I didn’t know it at the time of “the incident,” and couldn’t see its tail buried in the grass of our backyard, so as far as I knew, it was a rattlesnake or some other dangerous cretin that was invading our property. Ergo, I had no choice but to dispose of it violently. (You can see some of the damage down near its head.)

It all began at about 7:30 am when Sparky’s incessant barking woke me (and Cari) up. He barks quite regularly in the morning, especially since construction crews usually arrive around that time to continue working on the 3-4 houses that are being built near us. So, at first, we didn’t think anything of it and just tried going back to sleep.

I noticed, too, that it wasn’t the normal Hey, human, I see you across the street! Stay away! I’m a dangerous and scary dog!” bark. It was much more focused and urgent, almost rapid-fire barking.

I looked out the window and he was down near the back of the property, not a usual place for barking. So, I groggily put on shorts and sandals and walked out back. As soon as I saw him, and he saw me, I knew something was up. He was on high alert.

My vision was still blurry from sleep as I slowly walked close to him. He was barking at something on the ground and sticking his paw out. The grass was high — we were planning to cut it later in the day — so I couldn’t see much. I got close enough to see about 5-6 inches of what was pretty clearly a snake.

Shite. Not my favorite animal.

I knew we’d eventually have a snake encounter since we built a house in what was previously wide open plains — plains that were still completely wide open on the other side of our fence. I just hoped that the snake encounter would happen when I was awake.

Back Story: 10 Years Ago

About 10-12 years ago, I think, we had a snake encounter at our old house — which was really odd because it was nowhere near the plains. I had gone out into our front yard and was working on my knees when I noticed a huge snake about 8-10 feet away from me. Scared the bejeezus out of me and, not knowing what to do, I cautiously went back inside and called animal control.

Problem is that this was late on a Friday or Saturday afternoon, as I recall, and they were nowhere to be found. I kept an eye on the snake from various rooms/windows inside as it crawled all around the front of our house, eventually stopping about 6-8 feet from our front door in a rock bed.

The city police eventually showed up and, after getting a pillow case and rake from us, they stoically collected the snake, wrapped him in the pillow case, and drove off to deliver him back to … the plains.

I remember them telling me that, if another snake ever paid us a visit, I could probably kill it by using a shovel and chopping its head off.

I’ve never forgotten that piece of wisdom. So, I went and grabbed my shovel and headed to the back yard again. Figured I could take care of this one myself since the snake seemed to be a bit smaller than 10 years ago.

The dog had been barking this whole time and the snake had moved a bit since I first saw it. Lucky for me, I could see its head clearly. Still couldn’t see the tail, so I didn’t know what it was. Also didn’t know how long/big it was, but the head was kinda small, so that was good.

I’ll spare you the details other than to say that it was about 2.5, maybe 3 feet long and, thankfully, didn’t have a rattle at the end of its tail. I showed it to the whole family so that they’d know what to look for in the future and we took the photo above on our back patio.

Whew. Never a dull moment living out in the country, is there?