(I’m fully aware that this is probably of interest to no one but myself. That’s never stopped me before on this blog!)

This past year (2012), I decided to keep track of how many articles and words I published. (As I’ve said, I have a thing about tracking stuff that I do.)

It was actually friends that unknowingly prompted me to track words and articles in 2012; several of you give me a hard time about how much I write and how many sites I write for, so I figured … let’s actually quantify this.

That averages out to 68 articles and 21,909 words published per month. And the average length of what I wrote was about 323 words.

What I’m Including: This counts articles that I wrote in 2012 on Search Engine Land, Marketing Land, Small Business Search Marketing, @U2, @U2 Blog and on this site, MattMcGee.com.

What I’m Not Including: It doesn’t count the daily Marketing Day recap on Marketing Land, daily SearchCap recap on Search Engine Land and the monthly link roundup posts that I published on Small Business Search Marketing. I didn’t include those because they’re mainly just lists of links.

Here’s a month-by-month recap of my 2012 publishing.

And here’s what it looks like in chart form. I’m going to put aside the tracking thing for 2013. Actually, I got a Fitbit for Christmas, so I’m gonna let it do all the work as it tracks my daily physical activity. 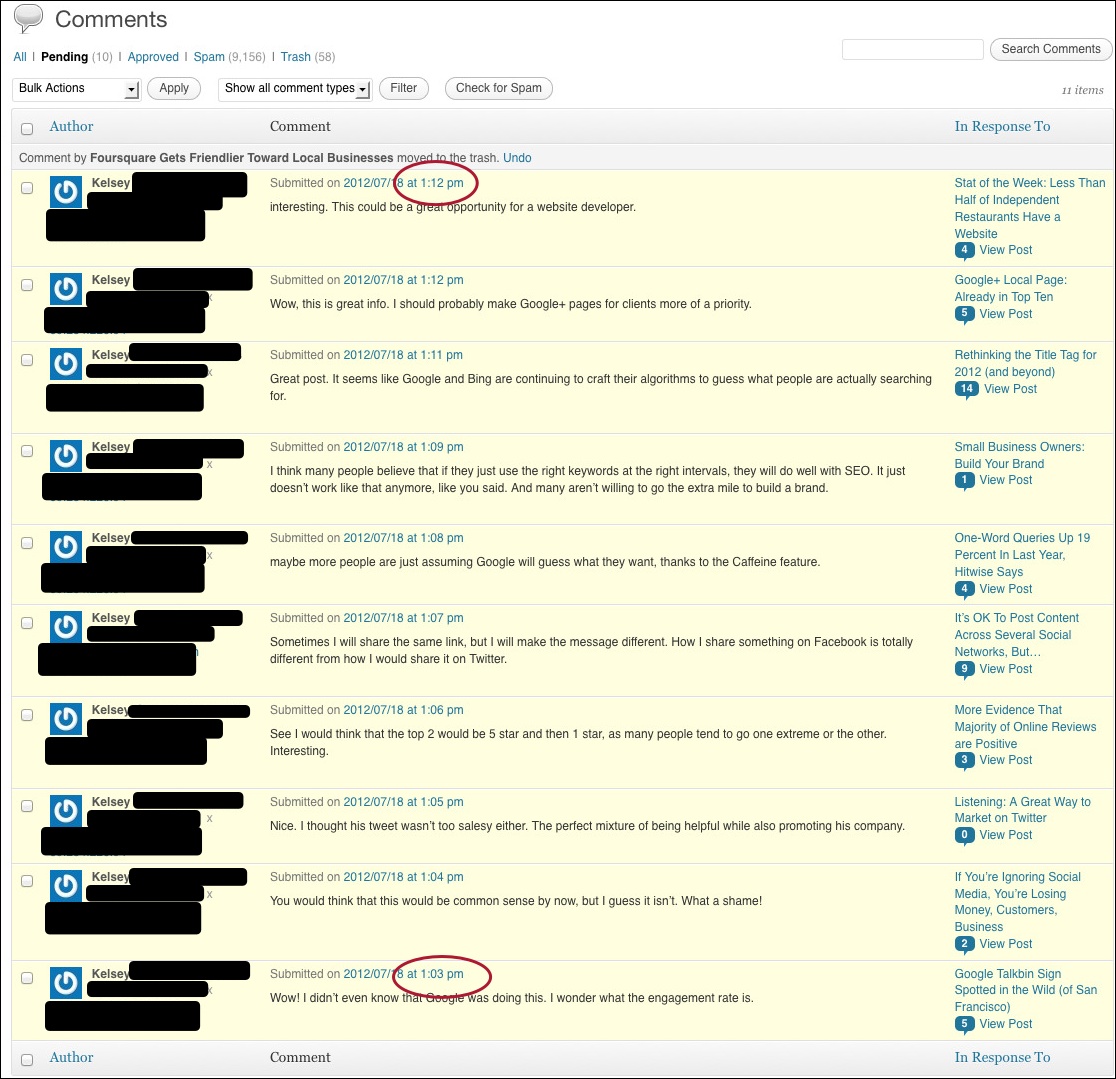 Earlier today, Kelsey managed to leave 10 comments on my small business search marketing blog in the span of nine minutes.

I’m a big believer in brevity, and I try to publish short blog posts that don’t waste people’s time, but there’s no way Kelsey read those 10 articles in just nine minutes.

The comments themselves aren’t fabulous, but if there were just one or two of them, I would probably have approved them. But at this quantity? No chance. They were all zapped.

Good luck with that blog commenting strategy, Kelsey. Shame that s/he didn’t read this post: Case Study: Power of a Blog Comment.

How Do I Get CSS to Display/Affect an RSS Feed?

Wondering if anyone knows how to do this: I want to get CSS coding to “show” in my RSS feed — i.e., to affect how the content looks in the RSS feed. I’m not even sure how to phrase the question, so my Googling for an answer has been useless.

Here’s the deal: Last week, I posted this Google/Facebook article on my search marketing blog. I made an image with the two logos and used CSS to make it show up on the right side of the text, justified to the side of the available space. Like this: That’s exactly how I want it to look on my blog. But when the same article shows up in my RSS feed, the image is NOT justified to the right. It looks like this, which is to say — it looks terrible: I want the RSS feed content to look like the actual article, with the CSS controlling how the image displays.

Is that possible? It’s probably brain-dead simple and I just missed a memo on how to make it happen. At least that’s what I’m hoping….

The Greatest Blogging Mistake I Ever Made It happened about a month ago. You may have seen it … or read it. It happened on my SEO/marketing blog when I published this post:

You could go read (or re-read) that if you want, but you won’t see anything that stands out as a mistake. In fact, you’ll see that it was tweeted 330+ times and liked on Facebook more than 50 times and you might wonder, what kind of mistake is McGee talking about?

I wrote that post pretty late on a Monday night, August 22nd. I finished at about 11:00 pm and decided that I should schedule the article to publish the next morning when humans are actually awake and online so that it would get more attention than it would at 11 pm PT.

Except I screwed up.

Rather than hit “schedule,” I hit the “publish” button. D’oh! And worse, it took about 20 seconds for me to realize what happened. And in that 20 seconds, the article had already hit my RSS feed and been auto-tweeted by a couple accounts that tweet any and all SEO-related articles they find.

So, the post was out there and it was too late to un-publish it. So, I decided to roll with it.

At 11:08 pm, when my Twitter stream is pretty much dead, I sent out a standard tweet about the article.

No big deal … until none other than Robert Scoble saw my tweet (I have no idea why he follows me) and decided to retweet it to his 200,000+ followers. Here’s what it looked like in his Twitter stream that night: It was amazing to watch my @mattmcgee mentions. They came in one after the other in rapid-fire, like nothing I’d seen before. After about a half-hour, I finally tweeted again and mentioned that there were “a zillion retweets” — slight exaggeration, but it got the point across.

What did it all mean, other than a ton of tweets and retweets? Well, for starters, my blog set a single-day traffic record because of all of the Twitter activity.

Best of all, it wasn’t just a one-day thing. Traffic has remained a small percentage ahead of what “normal” used to be, which often happens when a lot of new people are introduced to a blog for the first time. August ended up setting a monthly record for blog visits.

And that’s not all; about a week after all this happened, I was checking out Klout and noticed this: Two days after the article was published, and after all of the attention it got, my Klout score jumped way back up and even passed 70 for the first time. That and $4 gets me a coffee at Starbucks — I know. It means nothing, but it’s interesting to see the impact of one blog article and how it goes beyond just visits to the blog itself.

Moral of the story: For all the effort we give in trying to decide the optimum time to publish blog posts, you really have no idea what’s gonna happen when you hit that “publish” button — even if you do it on accident at a time when you assume no one’s paying attention.

I was going to do a blog post here listing a bunch of my pet peeves. Then I realized that my family and friends would take that list and use it against me. I’d never be able to avoid them. Ack!

So that idea is dead.

Moral of the story: Avoid blogging mistakes by thinking your idea through to its natural conclusion.

I never look at the analytics for this blog, but couldn’t resist checking my most popular posts of 2009. Here they are, becuz I know you’re as curious as me.

That second post — Consumer Reports — was responsible for the single biggest day of traffic this blog has ever seen.

Now back to your regularly scheduled programming.