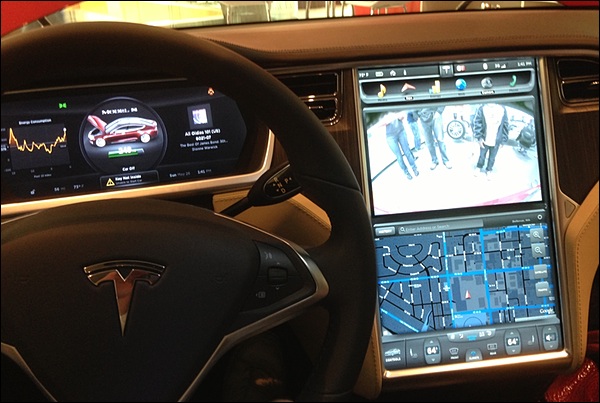 I saw several Teslas on the road a few weeks ago when I was down in the Bay Area, and I’ve read a fair amount about them, too. But I’d never seen one up close until this weekend.

We were over in the Seattle area for the weekend, and came upon a Tesla “store” inside the Bellevue Square Mall. It was pretty crowded, no doubt thanks to the cherry red Tesla right in front. Everyone was gawking at it, so we had to join in. And a couple people were sitting in it.

So we waited our turn and then got inside, too.

Seriously beautiful. I’m not even sure what words to use to describe it, so how about just seeing the Tesla photos that I took? That should get the point across. Buying a car can be a really stressful event, right? Not many people actually look forward to going into the car dealer and getting the high-pressure sales pitch then having to sit through a torturous negotiation process.

So when you hear the phrase “car dealer,” it probably has a lot of negative connotations. Who wants to go to the “car dealer”??

I don’t think the problem is the “car” part … it’s the “deal” part. Pretty much everything else we buy in life (aside from cars and houses, mainly) is pretty easy: There’s a set price and you either pay it or you don’t. It’s easy.

So, at the risk of sounding like Andy Rooney, have you ever wondered why the auto industry hasn’t tried to change the name of its businesses? Rather than “car dealer,” I think they should call them car stores.

Doesn’t that sound so much less intimidating? A lot of people enjoy going to the store. No pressure. No negative connotations.

“Let’s go to the Chevrolet store and see what they have.” That beats the heck out of “I have to go to the dealer and look for a car.”

I really think they should start rebranding the whole experience now. And start with the name. They’re car stores, not car dealers. (It would also help if they’d get rid of the high-pressure salespeople and the insufferable process that buying a car entails, but hey … gotta start somewhere.)

Google has a large campus down in Mountain View. Large. The main campus is big enough on its own, but they’ve also spread out to several other buildings in the surrounding area.

To make travel easier for employees going from one building to the next, they also have little multi-colored bikes that you can just grab and ride and leave behind when you’re done. Well, by “you” I mean — if you’re an employee.

I was down there earlier this week for some meetings at the Geo/Maps building, which is off the main campus about a half-mile away. Then I had to get back to the main campus for more meetings. Hoped I could maybe use this as my getaway vehicle… Still, it was pretty helpful finding the right building. Hard to miss all that on the front lawn of an office building!

… won’t actually be a car, it’ll be a Toyota Highlander. Like maybe this one: In late 2006, when I started working at Marchex and was faced with having to drive the 200+ miles from West Richland to Seattle at least twice a month, I had a feeling my little Toyota Corolla (the 1999 model) wouldn’t survive much longer. So I started looking for something bigger and sturdier to get over the mountains in winter, and decided on the Highlander. Never bought it, though, because the company let me work from home over the winter months while Snoqualmie Pass was more like an ice rink than a highway.

Fast forward to two weeks ago, when we’ve rented a mid-sized car for our vacation back in Philly, except when we get to Avis they’ve upgraded us to a brand new, only-5-miles-on-the-odometer, 2008 Toyota Highlander. YES!

I’ve been wanting to drive a Highlander ever since ’06, and this was my chance. I wasn’t disappointed. The thing drove like a charm — super smooth, very quiet, all kinds of comforts in the passenger cabin. And, much to my surprise, it went more than 300 miles on 3/4s of a tank of gas! We drove from Bristol up to NYC and back, then down into Philly and back, and didn’t have to fill the tank until the day before we were coming home. There was still 1/4-tank of gas and we’d gone more than 300 miles. When I went to the gas station, it took a little more than 15 gallons … so 300+ miles divided by 15+ gallons … more than 20 MPG for a big SUV. I’m sold.