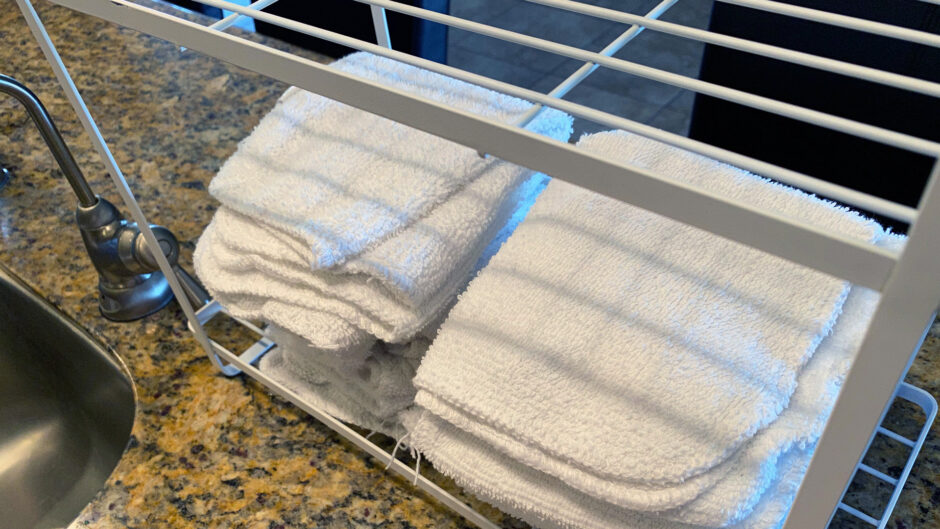 We did a little thing here at Casa McGee that I think and hope is both good for our wallet and good for the environment.

For years, we’ve gone through paper towels at an alarming rate. We’ve used paper towels for pretty much anything and everything. We’ve used them to clean up spills, of course. We’ve also used them in place of napkins and hand towels. We use them to cover foods that needed a cover in the microwave.

I mean, we used them for just about everything.

When you buy Bounty or Kirkland paper towels at Costco, you get 12 rolls, and we’d go through a case about every six weeks. The cost would usually be $20 (for Kirkland) to $30 (for Bounty) per case, so let’s call it $25 per case. So $25 per case, and a case every six weeks … if my math is right, that’s a little more than $200/year on paper towels.

Well, earlier this summer we made a little change. There was an article in Consumer Reports where one of the magazine’s writers confessed that he, too, was a serial paper towel user. But he bought a couple dozen white washcloths and started using them in just about every instance where he’d normally use a paper towel.

So we decided to give it a try. We now have this little two-shelf rack right next to the sink — same place the paper towels used to be — with 25 white washcloths. Total cost at Target was something like $16.

We use the washcloths as napkins. We use them to wipe and dry countertops and dishes that don’t go through the dishwasher. And then we wash and reuse them.

Maybe not a huge deal, but it still feels like the right thing to do.

Back in January, Cari and I started tithing again at church. And wow, did that feel good.

It had been about five years since we tithed regularly. We reluctantly stopped because we had attended Dave Ramsey’s Financial Peace University — a class aimed at teaching better money management skills and eliminating family debt. And during that class, Dave encouraged everyone to continue tithing while reducing debt, but also said that in cases of extreme debt, it might make more sense to stop tithing and dig out first.

We’d been irresponsible with credit cards going back to the 1990s. We were living well above our modest means. I used credit cards to fund my attendance at eight shows on U2’s PopMart tour, and eight more on the Elevation tour. When Cari got out of retail and started her real estate career in 2004, things got even worse. She wasn’t making any money (almost no one does when they first start out in real estate). We were taking cash advances on Card A to make the minimum payment on Cards B, C and D. Our debt grew each year and reached a high of $82,000 in 2006.

We managed to get rid of a little debt over the next year or two. And then, in early 2008 (as I recall), we attended Financial Peace University and it literally changed our life. That was the inspiration and education that got us on the road to ending the slavery of debt.

We didn’t follow the program by the book. We should’ve devoted every extra dollar we had to paying off debt — no vacations, no eating out, no unnecessary expenses, etc. But I wasn’t willing to go several years without, for example, getting my kids back east to see and spend time with my parents. So we took a little longer to eliminate our debt than we could’ve.

But we paid off all our credit cards, one at a time. Each one was closed as soon as the last dollar was paid, and then we got to enjoy the cutting up of the credit card.

In early December 2012, the last credit card was paid off. Wow, did that feel great! That was the end of a five-year battle to get rid of $82,000 in debt. Today, the only debt we have is our house payment. That’s how it’s supposed to be when you follow the Financial Peace plan — no debt except your house. And that you try to pay off as quickly as possible.*

We pay for just about everything with cash or our debit card. We do have a credit card, but that’s only used when it doesn’t make sense to use a debit card and we pay off any balances on it right away.

And we couldn’t have done it without Financial Peace University. Can’t recommend it enough. You can visit the FPU website to find upcoming courses in your area. Want to get out of debt and be the master of your own finances again? Give it a shot.

*There are a lot of details about the FPU plan that I’m skipping. It’s basically a 7-point plan, as mentioned below in this FPU video. 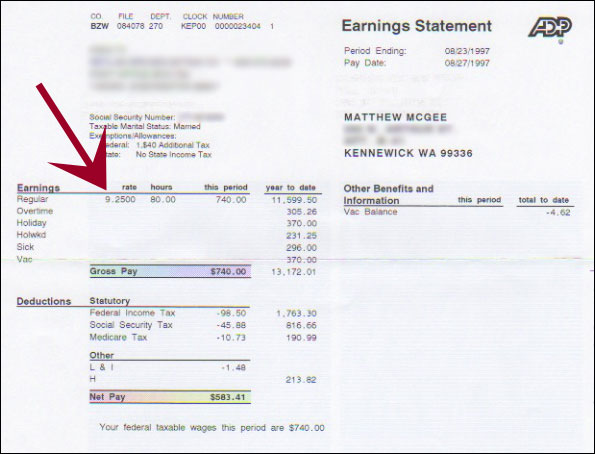 One Reason Why I Left TV Sports

When I tell people that I used to a TV sportscaster, some of them are dumbfounded that I’d ever leave such a job. TV sports is fun! You get paid to watch sports and tell people the scores! You get to show highlights and crack jokes!

But today, I was reminded of one of the reasons that I did get out of TV sports in 1997.

While going through some old files and paperwork (still unpacking stuff at the new house), I came upon this: That’s a bit hard to read, but it’s my last paystub from the TV sports job. And, as you can see from the red arrow, I was making a whopping $9.25 per hour.

Granted, this is a pretty small town as far as TV goes, but still … I was the Sports Director, the primary sports employee who anchored the 6 pm and 11 pm weeknight sportscasts for a CBS affiliated station.

There were several other reasons why I got out of TV, but salary was certainly a big one. We were four months away from having our first child and there was just no way I could support a family on that paycheck.

Heck, I don’t know how anyone can support him/herself now on that salary. The drive-thru guy at McDonald’s must be making more than that….

One Reason We Love the Tri-Cities

Since leaving my last company job in mid-September to work for myself, I’ve been contacted by search marketing companies on both coasts wanting to know if I’d consider relocating the family and coming to work for them. In one case, I had to think about it a bit; in another case, it was a quick, “thanks, very flattered, but not interested” reply.

The reason? Money. Not salary, but cost of living. It’s one of the main reasons we enjoy living here. Cari wrote a few months ago on her blog about surveys showing that Tri-Cities is the least expensive place to live in Washington … and, as I remember my time in 2006-07 when I lived half of each month over in Seattle, it’s true.

This past week, a similar survey came out reinforcing this idea: the cost of living in the Tri-Cities is about 36% lower than Seattle, and about 11% less than the national average.

Fact is, our dollar goes further here … and that’s why we’re not going anywhere anytime soon. Mrs. McGee and I are doing our best to get rid of all credit cards in our possession. Unfortunately, it’s slow going because we did some pretty stupid things in our 16+ years of wedded bliss. But we’re making progress, and we’ll eventually get there. Everything will be purchased with cash or debit cards, with (I assume) the exception of homes.

Because we agree with this sentiment: