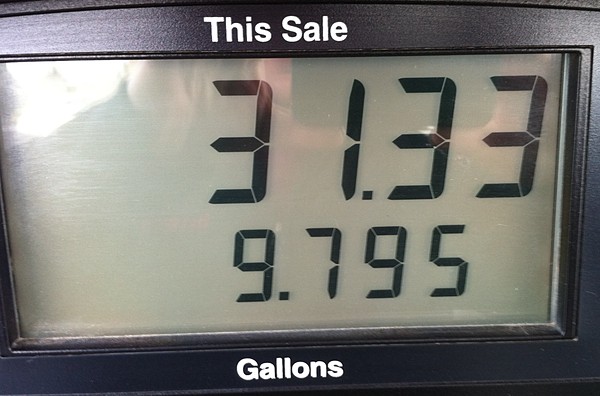 I tried to make it through this week on just a few drops of gas in the car, but we’ve been running all around with errands and other stuff all week, so I had to make my last stop at the gas station yesterday afternoon. That’s my 15th and final fill-up for 2011. And it was probably the least expensive, too: It would’ve been about 12-13 fill-ups except for a drive over to Seattle in September with my son to watch a Seahawks game.

So, as expected, I am pretty much a male version of the little old lady who drives to the store once a week and that’s about it. This is why my 1999 Toyota Corolla still has less than 100,000 miles on it.

If you’ve read this far, I’d love to know how often you fill-up your car? Once a week? More? Couple times a month?

(I’m tracking how rarely I fill up the gas in my car in 2011 because I hardly do any driving these days. Thought it would be fun to see how rarely I go to the gas station.)

Only nine days since the last fill-up, this one needed mostly because Cari’s car was in the shop a couple days and she used mine. And real estate agents do a lot of driving.

If you don’t know what this is about, I started tracking how often I fill my car with gas earlier this year after realizing that I’d only filled up once or twice in the first 2-3 months of the year.

(Posting this on October 31, but dating it October 27 since that’s when I filled up.)

So much for averaging one trip to the gas station per month for all of 2011. I filled up today for the 12th time this year — and we’re still in mid-October.

You know what messed it up? The Seahawks. My son and I went to see the Seahawks over in Seattle about a month ago, and I had to fill-up twice in two days. But a weekend in Seattle with my son and a Seahawks win? I’ll take that anytime.

(If you have no idea what I’m rambling about, I’ve been tracking how seldom I fill-up my car with gas because I don’t drive much and my old Toyota gets great gas mileage. Decided at the start of the year to keep track of how many times I buy gas.)

Posting this on the 27th but dating it the 26th. Filled up with gas for th 9th time all year yesterday. Just using the blog to track how rarely I need to fill up…..

I’m posting this on August 11, but dating it August 6th … cuz that’s when I made my 8th trip to the gas station in 2011. Just a marker post here so I can keep tracking how rarely I have to buy gas as a work-at-home guy.