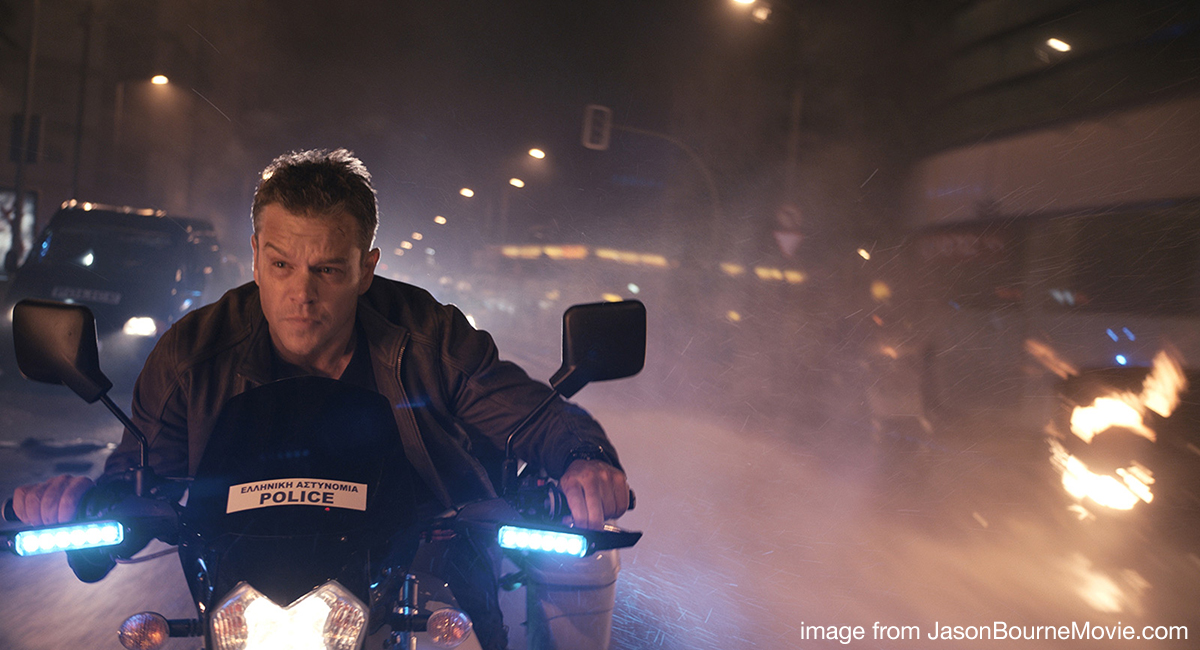 Over the past week, I rewatched the entire Jason Bourne film franchise and I feel like the greatness of this series needs to be celebrated. Some random thoughts:

1. Overall, this is the best spy movie franchise IMO.

Whoa, Matt, what about James Bond? I hear you saying.

Look, I get that Bond is iconic and legendary and all that, but there are 20-plus films in that series and they’ve rebooted it after several of them almost killed the franchise and some of the films just don’t stand the test of time. Maybe it’s not fair to compare a 5-film series like Bourne to a 25-film series like Bond, but it’s an inevitable comparison and Bourne wins hands down for me.

Bond movies sometimes rely too much on the gadgetry to get their hero through to the end, while Bourne mainly has just his brains and brawn (and some guns, of course). I’ll take the grit of a Bourne movie any day over the elegance and luxury of Bond.

(Note: I really need to see all of the recent Mission: Impossible movies. The 1-2 I’ve seen were really good, but I can’t really say how the series holds up against the Bourne films.)

2. The first three Bourne movies are brilliant and perfect together.

The story arc in these three films is as good as it gets, and it would’ve been just fine if the series had ended right there. You get the whole story of Jason Bourne trying to figure out his past and how he got into this government spy/assassination program. Even the symbolism is perfect — the first movie begins with Bourne in the water not knowing who he is and the third movie ends with Bourne in the water after he’s figured out who he is. Full circle and all that.

If you ever have six hours free and want a mini-marathon of great films to watch, look no further.

3. The fourth Bourne movie is … well … just a shame, really.

The storyline on Bourne #4 has potential, and it’s kinda clever to tell this related story of events that was happening at the same time as the events in the other Bourne movies (particularly #3), but this movie had so much going against it from the start that it never really had a chance. And that’s sad.

None of the actors look like they want to be in this film. The action scenes aren’t anywhere near to the standard of the first three films. Heck, everything comes across as a pale version of what came before. And mainly it all feels kinda empty because Bourne is in the title but not in the movie itself. I think this one has about a 50% rating on Rotten Tomatoes and that seems about right.

The last movie in the series has an unfair rap, and I don’t get it. It’s got one of the great opening scenes that establishes Bourne is back in about 30 seconds. It’s got fantastic chase scenes — the Athens and Vegas chases are every bit as good as what’s in the first three movies. The story is current with all that was going on in the surveillance world a few years ago (i.e., Snowden and social media privacy issues).

I’ll give that it’s not quite as smartly written as the first three. And Alicia Vikander is as stiff as a board throughout, but it’s still a really great movie and deserving of higher ratings than it got. If the first three films are A-level, this one’s a solid B for sure. Don’t listen to the haters saying worse.

5. I can’t decide which one is my favorite.

For the past few years, I’d eagerly tell you that #3 (The Bourne Ultimatum) is my favorite of the bunch. But after this rewatch of the whole series, I feel like I undersold #2 — The Bourne Supremacy. That one has some incredible writing and plot twists, plus all the other great stuff I love in these movies. So right now I’d say it’s a toss-up for best/fave.

It’s highly unlikely — in the extra scenes attached to Bourne #5, both Matt Damon and director Paul Greengrass repeatedly refer to that film as the “culmination” of the series and they talk about it as the end — but I’d sure welcome more. Bourne #5 leaves the door slightly open for more with the way the film ends, so I’m keeping fingers crossed that someday they decide to give it another go.