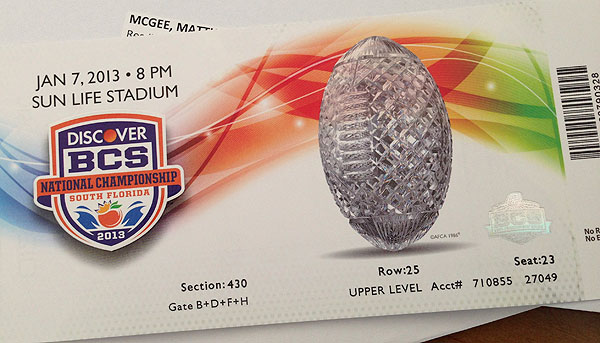 After Notre Dame beat USC to guarantee a spot in the national title game, I jokingly applied for the school’s official ticket lottery … me and a zillion others. Needless to say, I wasn’t selected with odds like that. And I thought that I hurt my own chances by applying as a single ticket buyer; surely they’d make more money by selling to pairs and larger groups of people.

But when the rejection letter also included a mention of a second-chance offer just in case some of the chosen ones decided against buying the ticket packages, I also signed up for that. What the heck, right?

It’s about 3:00 pm PT and I’m in my car, sitting in the parking lot of my daughter’s school. She’ll be out of school soon and I’m waiting to get her and head home.

I never answer the phone if it’s a number that I don’t recognize. And I didn’t recognize this number. But below the number, the caller’s location was showing: “South Bend, IN.”

Holy crap. That’s where Notre Dame is located. Could they possibly be calling me about the BCS game?

I thought for a couple seconds and decided to answer.

Sure enough, it was the travel agency that’s handling the official travel/ticket packages and they had some cancellations and chose my name from the waiting list and was I still interested in going to the game?

The young lady — I think her name was Julia — started going over all the details with me, but I was in the car and didn’t have a pen to take notes. Plus, my daughter had just gotten in the car and we needed to move along so other parents could get their shorties.

I asked if I could call back later. The gal said I could, but it was 6:00 pm there and she was headed home for the day after maybe 1-2 more calls. She said there was no guarantee they’d still have openings in the morning, but I could leave a message and I’d be her first call the next day if there were.

I got home in a panic and called Cari. She said I had to go, even though the ticket/travel package was really expensive. I was feeling guilty even before committing to go. She said Notre Dame may never play for the championship again. Go!

I also emailed Danny Sullivan and Barry Schwartz about work scheduling — I knew that Barry would be in Israel while the BCS trip would happen, so it might make things really tough if both he and I were traveling at the same time. But his schedule in Israel was actually not too bad, so there were no work-related problems.

I called back to the number that Julia had called from. Got her voicemail, but the message listed a general number that I could try calling.

I did. Another gal picked up; don’t recall her name. I told her I was speaking with Julia a half-hour earlier but was in the car and couldn’t talk, and wanted to get more info. This gal went over the whole package offer with me again, and the prices, and the hotel choices and everything else. Did I want to buy?

I did. I gave her a credit card number and five seconds later she said, “Okay, it went through. Congratulations!” I asked her what would happen if I found out the next day that I can’t go — can I cancel? “Well, you can cancel but we can’t offer refunds. All bookings are final.”

We ended the call and I felt awful. Not guilty-awful … well, that, yes … but I felt physically ill. Like I was going to throw-up or faint or both. I called Cari back and told her it’s done, and that I felt sick. She again tried to make me feel better, but it wasn’t too successful.

Even though I felt terrible, I sent out an excited tweet (that I now regret).

I felt sick for most of that night. It took a few days for me to feel okay with everything.

Anthony Travel, the official tour operator, sends me a five-page email with details about all the associated events happening in Miami for Notre Dame. I’m not arriving until late on Saturday the 5th, so I’ll miss that day’s fun.

Anthony Travel ends me another email. It’s now eight pages of ND-related events, including Sunday Mass and some community service stuff, too.

Three days to go. I’m gonna need a ride from the airport to my hotel, so I contact the trusty car service that Notre Dame’s tour operator recommended. They said this company was offering discounts to tour package buyers like me. Got an email back saying my one-way ride in a sedan would be $195, or I could get an SUV for $235.

Wow. Okay “discount,” I see how it’s gonna be this week. (And I’ll take my chances with a cab, thank you verra much.)

It was Notre Dame Central at the gate for my second flight — San Francisco to Miami. Fun chatting with fellow fans.

While we’re in flight, the Notre Dame events are underway in Miami. There’s a big fanzone/fan experience thing happening all day, and then the official Notre Dame pep rally is tonight. We’ll all miss it, which means we’re missing the chance to see hear Lou Holtz in person. I was tempted to break out my spot-on Holtz impression to make up for this, but decided against it.

Cab ride to the hotel was fine, and $90 cheaper than the “discount” towncar offer.

Since I arrived so late last night, today was my first chance to really check out the hotel and local area. Beautiful!!! The view from my balcony is incredible, and there’s a lot of nice shops and stuff right along the beach.

There are all kinds of Notre Dame events planned today, but I’m not going to any of them. They’re all about 30-40 miles away down in the South Beach area, and the bus schedule wouldn’t let me get down there and back in time for today’s Seahawks game. The 12th Man has his priorities, after all.

I did, however, check in with the tour operator people to pick up my game ticket and other passes for tomorrow. Super excited!!! Here are some photos from the day.

(You can click that one for a bigger panorama view.) The Alabama hospitality area for our hotel was about 30 feet to the left of ND’s, and it was empty. Local media said last night that there seems to be a lot more Irish fans here than ‘Bama … we’ll see.

Game day! I have to say that the folks at Anthony Travel have done a great job organizing everything in this tour package. In addition to the emails earlier and the info packet I picked up yesterday, I was also able to sign up for text alerts/reminders of all the important day-to-day things — very helpful.

The bus left at 10:30 am for the drive down to Miami and the day’s first event — a Notre Dame-only tailgate party. On the bus ride, I sat next to an older lady who lives in South Bend and whose family has had Notre Dame season tickets for 101 years! Can you imagine?

Anyway, good food, lots of things to see and do, and some fun speakers at the tailgate party. Dick Vitale came out first and fired everyone up, and Cris Collinsworth was next (his son plays for ND). The ND cheerleaders and leprechaun were there. Guess I’d say that I had about as much as you could have at that kind of event when you’re by yourself and don’t know anyone. Sure wish I could’ve brought my son along … would’ve been much more enjoyable to share the whole day with him.

Here are some pics from the ND tailgate party. From there, we loaded up the buses and went to the stadium. There was a massive tailgate event out in the parking lot that was packed. Hung around there for a while, then spent an hour in line so that I could be one of the first fans in the stadium. It worked; I was about the 20th person let in. Walked around a bit and grabbed dinner before heading up … and up … and up … and up to my seat. Wow. I was in the ND end zone, six rows from the top of the stadium.

As the stadium filled up, it was clearly a major Notre Dame crowd. We probably had 60-65% of the seats. Sadly, the team didn’t give us much of anything to cheer about. Still, despite the lopsided final score in the bad guys’ favor, the whole thing was a great experience that I’d gladly do again if Notre Dame gets another chance. Why I’m a Notre Dame Fan

Here in Washington, you’re either a Cougar or a Husky. There might be a few stray Gonzaga, Oregon or Oregon State fans around … but sports fans in this state are defined by whether they root for Washington State University (Cougars) or the University of Washington (Huskies).

So people are always surprised to find out that my college sports heart is located a couple thousand miles away in South Bend, Indiana: home of the Notre Dame Fighting Irish.

I grew up in Pennsylvania, went to college in southern California, and have lived most of my adult life in Washington. How’d you get to be a Notre Dame fan?, everyone around here asks.

1.) I’m Irish and grew up in a Catholic neighborhood and school.

2.) My aunt got her PhD at Notre Dame and was an associate professor there. And, get this … one of her students was a guy named Joe Theismann. True story. They reconnected a few years before my aunt died at some kind of reunion or similar event, and they took photos together and he signed some footballs for her — one of which is still in our house right now.

3.) My childhood neighbors were a Notre Dame family. The father and first son, I think, both went to Notre Dame and were big fans. So whenever I’d be at their house on a Saturday, the Notre Dame game would be on.

4.) Notre Dame was (and still is) a national program that was on TV all the time. Not only on Saturdays, but also on Sundays. Every Sunday morning, either before or after Mass, the Philadelphia TV channels aired two separate college football shows — a one-hour highlight recap of the Penn State game a day before, and a one-hour highlight recap of the Notre Dame game a day before.

So, in a nutshell, I was surrounded by Notre Dame via family, friend and neighborhood connections, and they were on TV all the time.

It was easy to be a Notre Dame fan. It’s been more difficult over the past 20 years or so, but now the Irish are relevant again nationally and I’ll be screaming at the top of my lungs when they play Alabama for the national championship in a couple weeks.

You can have your Huskies or Cougars. I’m all Irish!