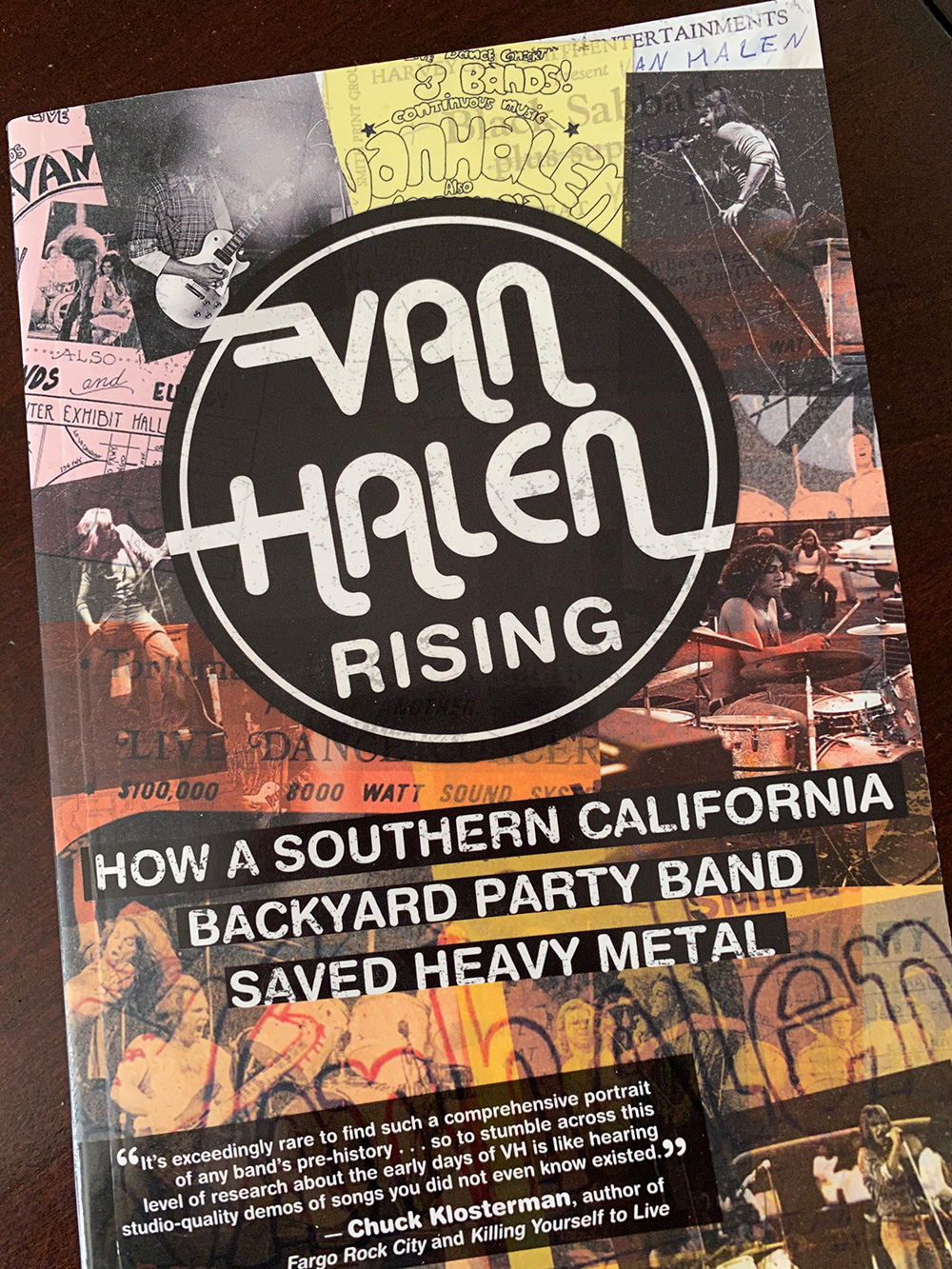 The Day I Pumped Gas with Eddie Van Halen

I have an entire shelf of books here in my office — stuff I’ve bought or been given over the years but haven’t had time to read. My “someday” shelf. This Van Halen book is on it. Gonna force myself to read it soon.

But first, a story.

During my senior year at Pepperdine, I had a car on campus for the first time. This was 1989-90. My dad gave me his old Toyota Corolla, rusty edges and all, and let me drive it across the country before school started. I was 21 years old, going to school in Malibu, and had a car to go wherever I wanted, whenever I wanted? It was pretty freaking great.

Even though the car was old and small and kinda beat up, I bought a sweet cassette car stereo — remember cassettes??!! 🙂 — and some kinda nice speakers. Because that’s what you do when you’re a 21-yr-old kid who loves music and loves listening to music loudly in his car. (I’m 52 now and that hasn’t changed one bit.)

I left campus one afternoon — don’t remember where I was going or why — and had the stereo cranked up as loud as possible. It’s Malibu, so it’s like 80 degrees and the perfect weather for blaring your favorite tunes with the windows down as you cruise down Pacific Coast Highway. On this particular day, I was listening to Van Halen’s OU812 album. I loved Van Halen back then (still do). They were my 2nd-fave band throughout the 80s. And unlike a lot of VH fans, I wasn’t snobby about the Dave vs Sammy eras. Loved ’em both.

So I head off campus that day, singing VH at the top of my lungs, windows down, and I realize I need to get some gas. There was (is?) a station pretty much right off-campus at the first main intersection you reach as you go into Malibu. I think it was a 76/Unocal station. I pull up to one of the self-serve islands, leave the windows open and stereo on, turn the car off, get out, and start pumping gas.

This really nice car pulls into the station — don’t recall what it was, only that it was one of those situations where you’re staring at the car without trying to look like you’re staring, y’know? The car stops at an island diagonal and across from me, maybe 40-50 feet away or so. As I’m pumping gas, it’s parked at about 2 o’clock to where I’m standing/facing. I have a clear view of it.

All of a sudden, EDDIE FREAKING VAN HALEN GETS OUT OF THE DRIVER’S SIDE and starts to pump his own gas. I kid you not. Eddie Van Halen is pumping his own gas across from me at a 76 station in Malibu. Then VALERIE FREAKING BERTINELLI gets out of the passenger side. (Aside: I had a huge crush on her in the 80s, no surprise there.) She heads in to the convenience store and I’m just standing out there pumping gas with Eddie Van Halen. I mean, there were probably other cars and people there, too, but it was just me and Eddie for all I cared.

Since I was there first, and probably because I had a much smaller car that needed less gas, I finished filling up before he did. So I get back in my car and I’m just kinda staring at him through the rearview mirror. Not in a creepy way, of course, but more in a right-over-there-is-the-greatest-rock-guitar-god-of-all-time way.

I notice that Valerie is walking back to the car and figure they’re gonna leave soon, and it would really be awkward if I’m still there when they leave, so I put the key in the ignition and start my car.

If you’ve ever started your car after not turning off the stereo when you got out, you know what happened next.

“Finish What Ya Started” comes FREAKING BLARING OUT of my little Toyota Corolla. About a nano-second later, it hits me: I’m blaring a Van Halen song loud enough for it to be heard a mile away, and EDDIE FREAKING VAN HALEN IS STANDING RIGHT OVER THERE. I immediately look in my rearview mirror, just in time to see Eddie whip his head around, look at my car, and give me one of those wicked little smiles he was known for.

One of the coolest moments of my life.

I know there’s Jimi, Eric, Jimmy, Carlos, Pete and many others. But for my generation, Eddie will always be the GOAT. 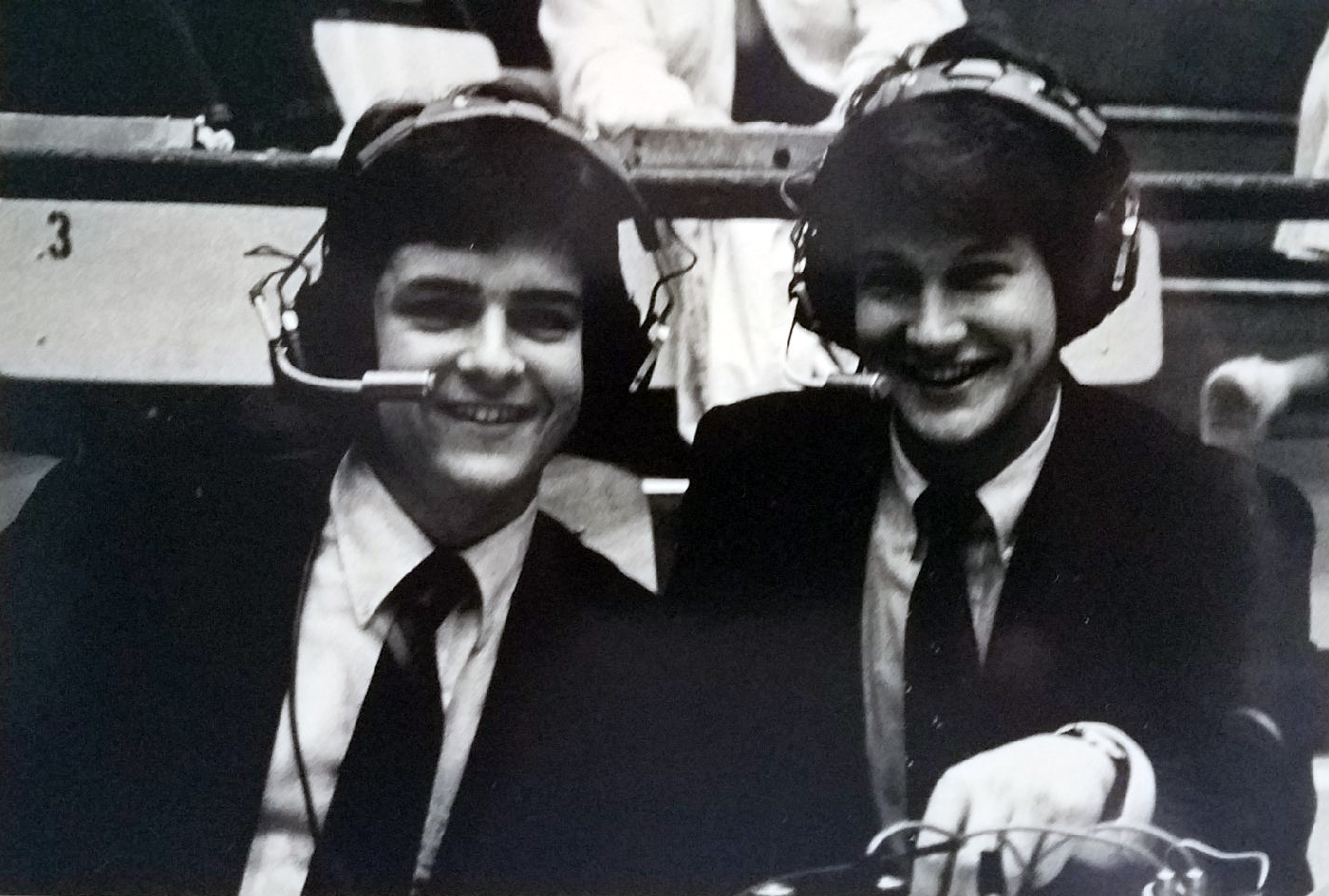 That’s me on the left and my Pepperdine sportscasting partner, Kent Justice, on the right, at a men’s basketball game. I really have no clue when and where the photo was taken, but I have a sneaking suspicion it’s from March 1989 in Las Cruces, New Mexico. That’s the night Pepperdine beat New Mexico St. in the first round of the NIT tournament. Kent and I somehow got the Communications Dept. to a) let us travel to New Mexico to broadcast the game on campus radio KMBU-FM, and b) pay our expenses!

We were both full of high hopes and dreams for lengthy careers in sportscasting. For me, the dream lasted about 7-8 more years. I got out of TV and radio sports in 1997 after being told by news directors in two bigger cities that I was their #1 sports anchor candidate, but they couldn’t hire me because I was a white male … and they were under orders to hire a female/minority. Seeing the writing on the wall, I got out of the business altogether, taught myself how to build and market websites online and the rest is history.

Kent, IIRC, has been in and out of the TV industry just a bit, but has settled in Jacksonville for some time now, and is currently the political reporter and weekend news anchor at WJXT-TV in Jacksonville, Fla. We spoke a few months ago and he’s happy and doing well.

That makes two of us.

Life doesn’t always lead where you hope or think you’ll go, but that doesn’t mean you won’t end up somewhere great.

That’s the view that I had every day of my freshman year at Pepperdine University. It’s a photo from the front of Dorm 11 and … wow … it was even more beautiful last month than I remember it being 25+ years ago.

We had some Search Engine Land/Marketing Land staff meetings last month down in the Los Angeles area, and I couldn’t resist the chance to check out my alma mater for the first time in (I think) about 12-13 years. So I took a day off and arrived early, rented a car and made the short drive up Pacific Coast Highway from Santa Monica to Malibu.

Fun! It actually reminded me of the beautiful drive from the Maui airport west toward Ka’anapaali Beach.

I made plans to meet up with an old friend — my friend Alan of Historical Tweets book fame — for lunch, but since I got to campus at about 10:00 am, I had plenty of time to walk around. I checked out the dorm area and the upper sports area (soccer field and track). I hiked up to the new Communications Division and found that they’re showing a photo of ABC’s Bill Weir, but not a photo of me or my friend Kent … even though we’re the ones who gave Bill his first at the campus TV station!

It was a great visit and now I really want to go back again with the rest of the family. Until then, the McGees will have to settle for the 16 photos that I’ve shared on Flickr. I’ll embed the slideshow below. Enjoy!