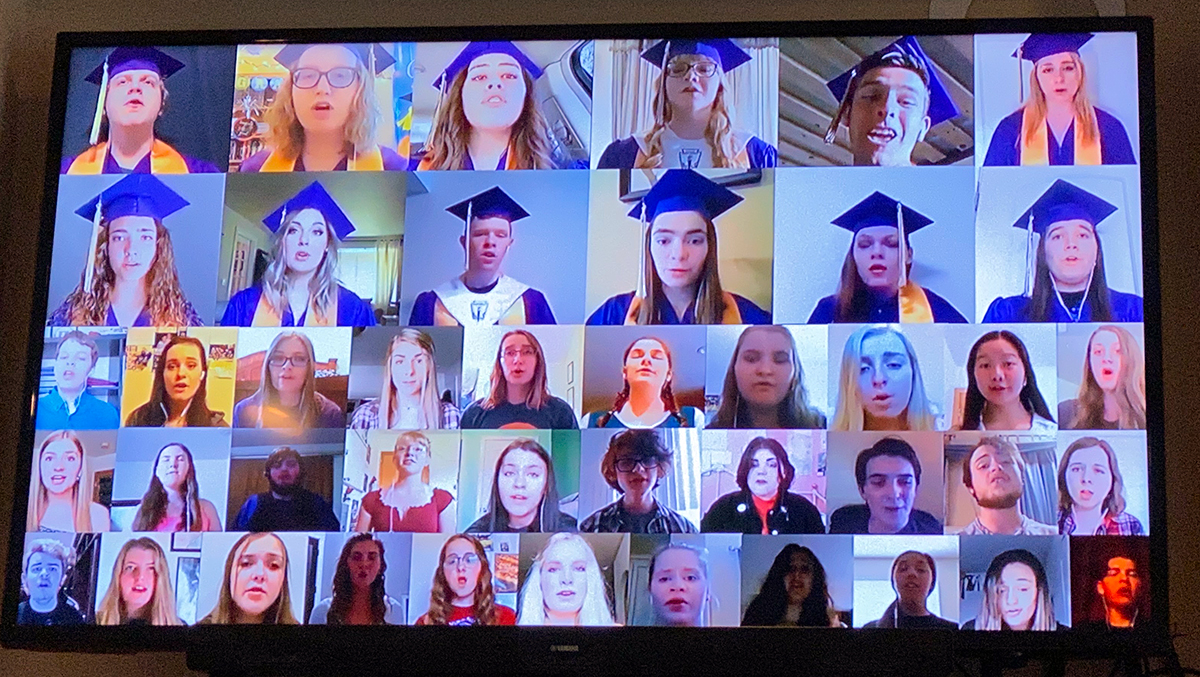 T is finished with high school. Well, not quite. She has one teacher who’s taking advantage of the bizarre pandemic-created schedule that has schoolwork continuing through June 9. So my daughter has a few more days of schoolwork even though she graduated today, June 5.

No, she’s not shown on the photo above — that’s the Hanford HS Choir singing the national anthem near the beginning of the festivities. T doesn’t like her name or photo being posted online, and we’ve always agreed with and respected her wish for privacy. But that photo above shows you what graduation was like. All virtual/remote, and we watched it on TV in our living room.

Sure, it was weird in a few ways … like our graduate not needing to wear her cap and gown during the ceremony, for starters. But TBH, we were all impressed at how well the whole ceremony went down. It was well thought out and there were no glitches at all. And it was pretty cool to see General Jim Mattis involved (he lives here), along with Foo Fighters’ bassist Nate Mendel (he’s an alumnus).

She worked her ass off until the very end, even though she didn’t have to.

Her grades have always been good. Never once in her elementary or high school life have we had to worry about that. So as the second half of this year began, she surely could’ve coasted along and still passed easily.

When the pandemic hit and schoolwork moved online, it was pretty difficult at first because no one knew what they were doing — especially the school and teachers. She was frustrated in the beginning, and she could’ve shut down and said “screw this.”

At some point, online learning was such a struggle that the schools announced that students’ grades would not be allowed to dip below what they were on March 17 — the date that home schooling began. My understanding is that if you were passing then, you’d pass the class as long as you finished the attendance and coursework requirements. She could’ve gone into autodrive and been satisfied with her March 17 grades.

But she didn’t and wasn’t. In fact, she worked hard enough to raise her grades before graduation.

If ever a student had an excuse to get a serious case of senioritis, it was T and it was these last two months of her senior year. She’d already committed to a college for the fall, so it’s not like she really needed to impress anyone at the next level. Graduation was pretty much a guarantee under any circumstances. But she kept working. And working. And improving her grades. And improving herself.

T … I can’t begin to put into words how proud I am of you for that. I’m so proud to be your dad.

Now go kick ass at college, and kick ass again in whatever career path you take. And don’t ever quit. Hard work will always win. Always.

They’re doing multiplication in the 3rd grade math class these days and my daughter is pretty good at it. So, when she answered the “Problem of the Day” earlier this week, she left a little note for the teacher. (you can click to see a larger version) School just ended, so I took T out for our traditional, celebratory breakfast this morning — second year in a row we’ve done this. (Cari and Sean started this tradition many years ago.)

While we were driving to IHOP, I mentioned to her that this was a “celebratory” breakfast in honor of another great school year. She wasn’t sure what “celebratory” meant and asked me what it means. I told her, and she understood, then she came back with this:

“It sounds like a word for a labratory where they study celery.”

How to Get to Our House

Last month, I suggested that April is the best time to visit the McGees. May is awfully nice, too. And our cherry trees bloom in June, so that’s also good.

Well, if you’re thinking about visiting, you’ll need to know how to get here. For that, we turn to our daughter, T.

She was on the phone with a friend several days ago, trying to make plans for the friend to come visit and play for a few hours. Now, T is not very experienced on the phone just yet so it was funny to listen to her side of the conversation and try to imagine what her friend was saying.

After all the plans were settled, the friend needed to know how to get to our house. The friend lives right near school, about a half-mile from here. She must’ve asked for directions, and that’s when T furrowed her brows and thought for a few seconds. And then she offered these helpful instructions:

“You carefully curve a little. Then you go forward.”

So, there ya have it. Come visit us soon, won’t you? The directions are simple. 😉 My Daughter Has 8 Boyfriends

I’ve told my daughter that she’s not allowed to date until she’s 25 years old, but that hasn’t stopped her from starting a collection of boyfriends at the ripe age of six. Every time I turn around, it seems she’s declaring how cute someone is, and how she’s in love with so-and-so.

So, a couple nights ago, when we had about 15 minutes to kill before dinner, I suggested she make a list of all her boyfriends. It took her two sides of a sheet of paper. Here’s what it says, in case you couldn’t tell:

And then she flipped the page over, skipped #5, and listed a few more.

Methinks I’m going to have my hands full in about 8-10 years.