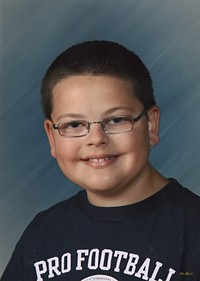 The Latest Reason Why My Son ROCKS My son, Sean, turns 14 on Friday. (That’s him at right; he’ll probably be angry that I’m using his picture here, but at least it’s a great photo, right??!!) When we asked him to come up with a list of gift ideas a while ago, he said there wasn’t anything he really wanted this year. He had a few small things on his list, but those could also be Christmas gift possibilities.

So Cari suggested that we could take the money we would’ve spent on gifts and instead donate it to charity.

He decided that he wanted to donate to The ONE Campaign, but ONE isn’t a charity. It’s a lobbying organization and they don’t accept public donations.

So the second choice, and the one we’ll be donating to in his name, is the African Well Fund. You know this group if you’re a U2 fan, but for the rest of you — the AWF is a charity started many years ago by U2 fans for the purpose of raising money to help build wells and get clean water to the neediest parts of Africa. It’s an amazing group of people doing great work, and I’m super happy that Sean chose the AWF.

More specifically, we’ll be donating to a current project that aims to bring clean water to 30 schools in Malawi and Tanzania. It’s the first project listed on the AWF donation page. We don’t know exactly how much we’ll be donating yet, but that’s okay.

I just think it’s really cool that a 14-year-old would eschew birthday gifts and instead give the money to those who need things more than him. And that’s the latest reason why my son rocks.

Can You Pick Up a Peanut M&M with Chopsticks?