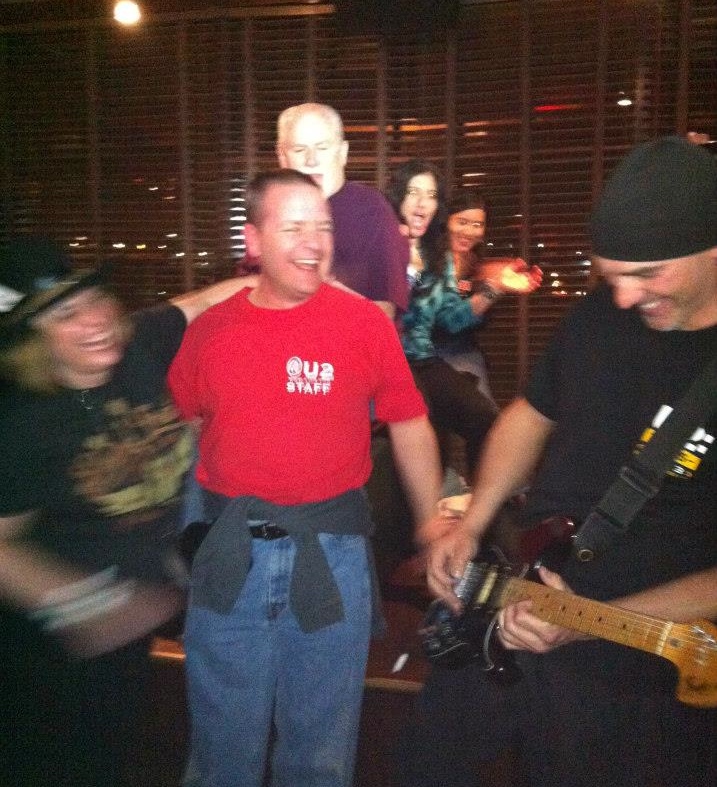 The U2 Conference had finished earlier in the day, and this was the scene of our post-conference party — a concert put on by Unforgettable Fire, a tribute band based in NYC and Connecticut.

I’m not generally a big fan of tribute bands. In fact, on this night, it seemed the whole crowd was a bit apprehensive for the first 3-4 songs. Not sure what to expect. And then Unforgettable Fire won us all over. They were fantastic — far and away the best tribute band I’d ever heard. I let myself get lost in what sounded amazingly like U2 itself. And I’m now a fan of Unforgettable Fire — they’ve spoiled me for every other U2 tribute band out there. They’re now the official “house band” of the U2 Conference.

During “Bullet The Blue Sky,” guitarist Mick came out into the crowd and made a beeline for me. He did the entire guitar solo, which runs a good two minutes if not more, right next to me. I grabbed Lori-Jo, better known in online fandom as EdgeFest for her love and devotion to all-things-Edge, because she had to be right there with me during the guitar solo. Cameras were flashing, video was being shot (which I haven’t seen yet), and we were having our own little party — me, Mick/Edge and Lori-Jo.

As the guitar solo started to wind down, something inside me said “go for it!” and so I decided to fill the guitar solo the way Bono sometimes does: by kissing The Edge! I leaned over, grabbed Mick by the neck and planted one right on his cheek. The crowd yelled. I started laughing my ass off. Behind me, Marylinn and Tassoula were in shock.

The photo above was taken about five seconds after all this went down. It’s what pure joy looks like. Damn, were we having a great time.

It wasn’t just the moment or the concert being celebrated in that photo; it was one of the most fantastic experiences I’ve ever had. As I wrote on @U2, something special happened that weekend at the U2 Conference. I don’t know how to describe it. No words.

What a night. What a conference. What a weekend. Pure joy.

(Special thanks to my friend and fellow U2 fan, Stacey Jaros, for letting me use her photo in this post. In fact, it was in the Facebook comments of this photo where she first mentioned the look of joy she captured. And she’s absolutely right.)

Postscript: My friend and photographer extraordinaire managed to catch the kiss on camera. Here it is! Too funny!!!